My wife and I own a 1926 Arts & Crafts Bungalow and the previous owners "restored" it in 1980's "Home Depot style". I have re done the bedroom and laundry/ back hall area in a style inspired by the architects Greene & Greene, and now it's on to the kitchen and breakfast nook. We needed a new refrigerator, but we didn't like the idea of a modern appliance in a Craftsman style house. However, since my day job is making things look like things they are not, or replicating just about anything, it didn’t seem to hard to make a 2011 refrigerator look like a 1926 enameled Ice box.

We looked at many different modern efficient refrigerators and liked the Samsung. But since I hadn’t started on the restoration of the kitchen, we weren’t in any hurry to buy a new fridge. Well one day, we found one at Lowes on sale, because the handles where missing and the door had a small dent. An offer we couldn’t refuse! So, I needed to build a fridge. Here is what I started with: 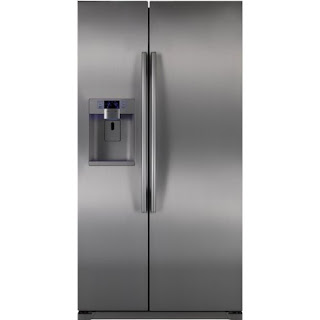 I did some research and found many examples of white enameled Ice box's and refrigerators from the 20’s and 30’s.  Here are a couple of examples: 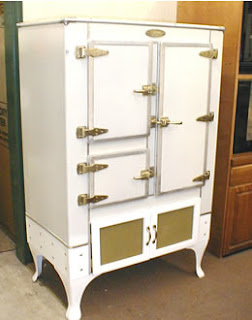 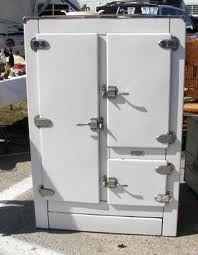 The plan was to add fake ice box doors to the front of the stainless fridge, with only the one over the ice maker a functional door. The others would be attached to the Samsung’s doors and when the handle was pulled, the whole Samsung door would open. I laid out the door proportions in Corel Draw and then cut ¾” MDF as patterns.  The doors where to be vacuum formed from 1/8 plastic about ½” high with a Coroplast filler.(Trade name for corrugated plastic material)  This Coroplast piece would keep the vacuum formed Icebox door panels stiff, without adding much weight to the fridge doors.

For my hardware, ebay seemed like a good source, but I couldn’t find just the right thing. So, I fabricated a handle in brass, based on a period one, but about twice as large and located the hinges from McMaster Carr. (A great source for many things) However, the hinges where $35 ea! I needed 11 of them and only 2 had to work. Well $385 for hinges was a bit to steep, even if we had saved double that on the “damaged” fridge. Luckily, I have a spin caster for “white metal” pewter casting, so I made my own.
This process entails "pressing" a rubber mold of your master parts in a vulcanizing press. This press heats the rubber to about 300 f and subjects the raw hot rubber to about 1500 psi. Once the mold heat cures (about an hour),  it’s placed in a spin caster and the molten pewter (500 f.) is ladled into the top of the machine which pours into the spinning mold. 60 seconds later, you have cast metal parts. This is a very common way to make many different types of inexpensive metal items. Here is a photo of the hardware and the rubber mold: 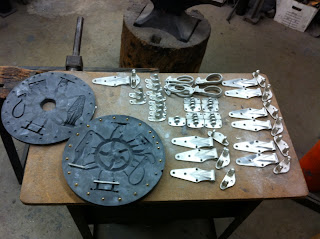 Each piece of hardware was attached with stainless machine screws with an “Oval” style head. This is a counter sunk screw with a slightly domed head. Since Phillips screws, invented by Henry F. Phillips, were not in use until 1937, slotted style was chosen. Each screw, threads into a “Riv-nut”, a “pop rivet” style of threaded insert that is commonly used in sheet metal applications. This riv-nut provides more robust threads in a thin sheet skin.

Here is the assembled fridge with plastic door panels and cast hardware: 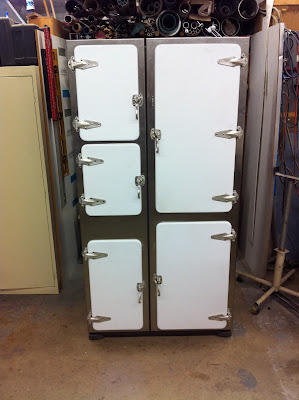 The door over the Ice maker has a vacuum formed inner panel and is bonded to the outer panel with a 3/8” wood filler to make a complete door that has a nice feel and weight to it. Since this was the only working door, I wanted it to feel more like the type of insulated metal door that would be on an original fridge.

Once I had all the hardware deburred and prepped I sent it to my friends at F&H plating for a brushed nickel finish. The fridge was sanded, masked and given a white automotive paint finish.

With the newly plated hardware the 2011 Samsung was transformed into a 1930’s(ish) fridge. 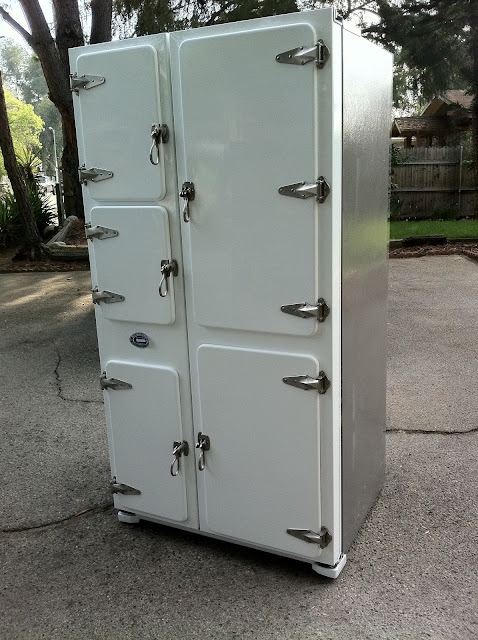 The last touch will be a “Manufacturers plate” added to the gap between the left hand doors. (A printed place holder can be seen in the photo.)

This gap between doors seems to be a common thing on many of these old fridges and I assume it’s because there is some plumbing elements there. Well since my door layout is cosmetic, with the exception of the door covering the ice maker, I incorporated this gap in the design with the intention of adding the plate. The manufacturers plate is acid etched in magnesium, using a process used for making rubber stamps. here is the finished badge. 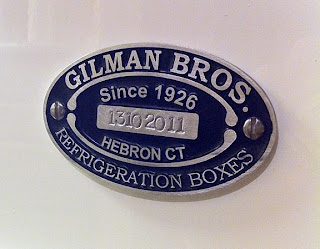 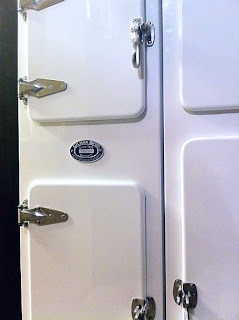 Per request, here is a shot of the fridge with the water/ice door open. It also shows the sheet metal fascia at the bottom, this replaces the original plastic one and facilitates the legs to be added. Most of these old ice boxes and coolers had legs and were raised off the floor. Because we have the fridge located in a part of the kitchen that steps down, raising it was essential to allow the righthand door to fully open. In addition, because both my wife and I are above average height, raising the fridge is perfect, it turns out it is a much better height for us. 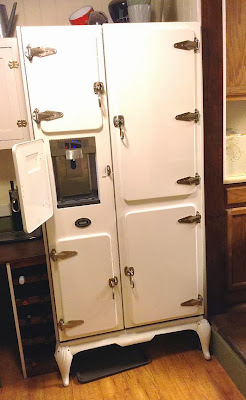 Email ThisBlogThis!Share to TwitterShare to FacebookShare to Pinterest
Labels: Things I've made