I decided to start the house with the 12’ box beams and the steel pieces I was to use to tie the house’s frame together. These box beams were constructed from 1x6 pine boards, mitered and glued together so as to hide the seam. Then they got a 5/8” plywood rib down the center, this rib was widened out at the ends by adding two more thicknesses of 5/8” ply so they would fill the 2” x4” steel tube with the clips.
The first test beam I made, I decided against the center rib of ply and to reinforce the box structure and help keep the beam from warping, I fibreglassed the interior surfaces, then filled it with rigid urethane foam.


Here is that first beam:

I tested this first beam (without the center plywood rib) and with a 520 lb. load in the center of the 12’ span, we got a little less than ½” of deflection.

I wasn't happy with the results, so I went back to my original plan and added the center rib. After adding the rib and increasing the box beam height from 5 ½”to 6 ½”, the deflection was nil.
Here are those final box beams during construction. I filled each beam with a 2.5 lb density rigid urethane foam after all the ribs and steel clips were in.

I hand cut a prototype set of steel fittings and tested the ease of assembly and the rigidity. I was very happy with the results. It had been pointed out by a friend, who did some calculations, that, though these clips wouldn’t fail, they may start to “flow” under any significant load. I did a load test and at about 1500 lbs (just as he predicted)  I did get some metal flow. At 2000 lbs it was enough that if the slots in the 4”down tubes where too narrow, the clips would have "riveted" themselves in. The slots were only .180" * and I was thinking of opening them to .250”, so I may not have had a problem and I don’t think I’ll see that kind of load. But, just in case I added a 2” x ½” angle tab in-between the slots and a 2”x1” tube welded between the clips. This makes a little “shelf” to take the load. Now at 2500lbs it’s fine. That gives me 5000 lbs. per beam.
(*Note: I prefer decimal measurments and will use them more often than fractions, sorry if this is confusing, and for the rest of the world, I'm sorry I'm not giving metric measurments, I would prefer to use metric, but all my equipment is imperial...blah!)

Here are photos of that prototype set, before and after the “reinforcements”

After adding the reinforcements:

Here are all the pieces ready for a "speed test". I wanted to see how fast and easy it would be to put all the elements together. Note: I wrapped the ends of the 4x4's in galvanized steel to "stabilize” the ends of the wood and trap a t-nut on the back side of the wood, so as the bolt is tightened it draws the 4x4 up against the front surface of the steel down tube.

less than 90 seconds to assemble one set.
At first the steel clips were going to be cut flat, then folded, as in my prototype, but during a visit to Industrial Metal supply (a local metal supplier) I saw they had a laser cutter designed to cut structural steel (i.e. Box, tube, I-beam and so on). So I decided to have the pieces cut from 2”x4”- 1/8” wall steel box. This would eliminate the need for the additional 1” tube welded in to catch the angle. I would also have the (18) 4”x 4” steel down tubes cut at the same time.

Here they are ready to have the corner brackets welded in and the threaded inserts added. 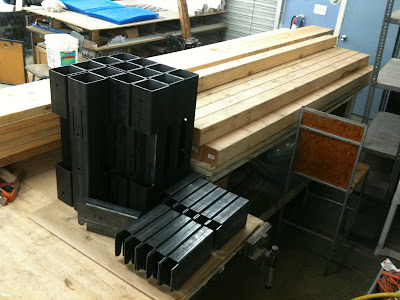 I change my design a bit here. With sheet metal I was going to fabricate a “tube” to slide the 2x10 into at each corner and in the center where the two 12 ft 2x10’s meet. But I decided to do this with steel angle instead. So the 2x10’s could be bolted in from the “outside”. This would turn out to be a very helpful change. As my father was a TIG welder (Tungsten-Inert-Gas) and that is what he first taught me (I think I was 10 or 11)

I have used a TIG welder to weld these. Here is how they look once all the welding was complete. 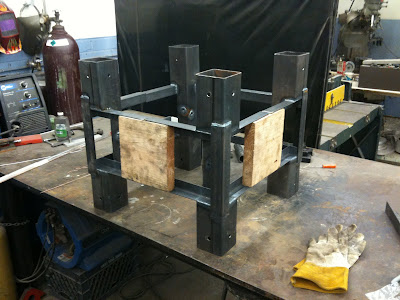 At this point in the build, my goal was to keep the tools needed to as few as possible (2?). All of the steel pieces use 3/8” steel bolts; so far, a 9/16” socket is all that is needed to put the house together. So with all of the box beams built, the brackets laser cut and welded, it was time to put all the pieces together.

Next, "The gutter beams"
Posted by Chris Gilman at 4:03 PM