One of the things I was suppose to have for last year’s Pennsic was a correct period table for the “jockey box” keg in my house. In trade for a bunch of old furniture, I had arranged with a local furniture restorer/ maker to make it for me. He flaked. So I am making it myself. Here is what I was looking at. I may do some of the carving. 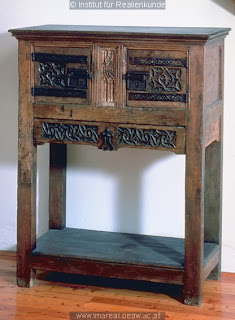 Saturday I did a drawing in Corel Draw and Sunday morning picked up some pine boards. Originally I had planned to “throw it together”, but I decided not to be so lazy and make it a little nicer. Now I’m not a wood worker, So if Peter Follansbee reads this, please don’t be too harsh. For those of you who don’t know Mr. Follansbee’s work, you should check out his blog, some amazing stuff. http://pfollansbee.wordpress.com/
Anyway, I don’t have a lot of woodworking tools and to cut my mortises, I used my Bridgeport mill. Nearly all of the other work was completed using a table saw, band saw, router and a compound miter saw. Working about 6 hours Sunday I got the frame completed. The board on top is a just for size. The real top is on the table in the background drying. 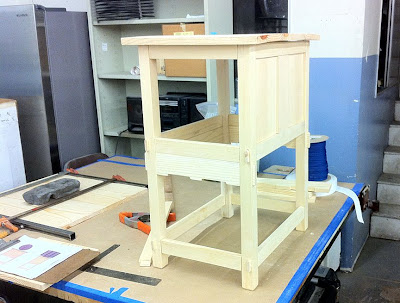 Monday morning I rabbitted the inside and lower shelves as well as the inside walls of the cabinet.  Here is the cupboard, just pressed together.  I still need to clean up the shoulders of the tenons before I glue it together and of course flush cut the tenons and sand them. But I'm pretty happy with the way it looks. 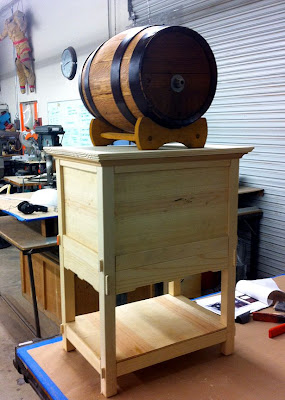 I now needed hardware. I have a very nice book that is filled with 19th C. etchings of 12th to 17th century ironwork. From latches and locks to gates and candlesticks. (I will get the title and publishing info and post it) I used a couple of examples in there to create the hinge design. I spent today making hinges.
Again, I first did a drawing in Corel and using 3M 77 spray adhesive I glued the printout to some 13 gauge mild steel. Using a band saw I rough cut these out. 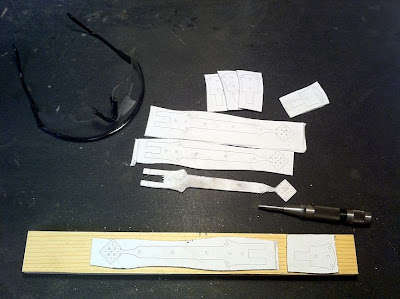 I then center punched the holes and drilled them. Then did the final cut. Once cut, I sanded the profiles with a Burr King. 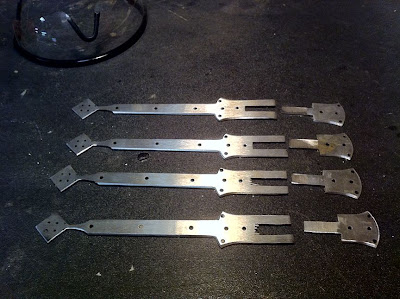 The decorations at the ends where made by making cuts with dykes, then using a torch to heat the steel to yellow hot a few times with a quench and wire bush in between, I was able to burn out the thinner metal left by the dykes and open up the cuts to match the look of the original.
I then tuned them up a little with a file and blackened them and applied a paste wax. They are currently “tacked on” with small screws, but they will be eventually held with clinched nails. (which I’ll have to make) 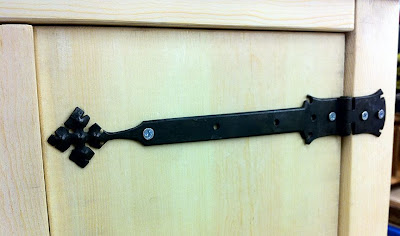 Here are all 4 on the cupboard 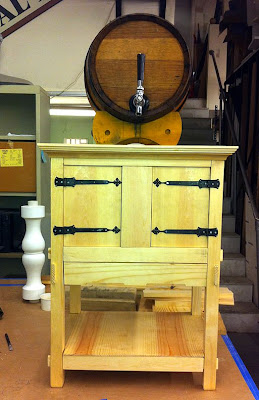 I still have the latch plates to make, but here is the cupboard in is designated place in the house. 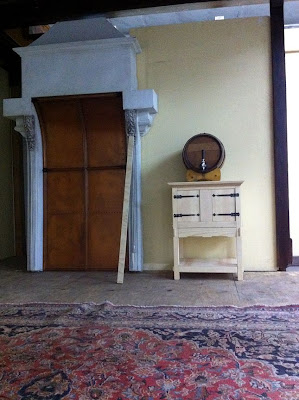