What is a spacesuit and why do we need them.

Why do we need space suits? “To go in space.” Well yes, but what is “Space”?
In my 30 years of doing work involving spacesuits either real or movie suits, I have found most people do not have a clear understanding of why spacesuits are used or how they work. If you try to learn about spacesuits from movies, well…. let’s just say you won’t. The network news isn’t much better. In most cases people think a spacesuit is just some sort of one-piece jump suit with a helmet, filled with air. You know, to keep “space” out and protect the astronaut.
But before I talk about the suit, let me paint a picture of the environment it’s protecting you from. Because in order to understand what a spacesuit is and why we need one, you really must first understand how our planet’s atmosphere works. This is one of those subjects that peoples lack of understanding makes it nearly impossible to have that “Ah Ha” moment without a bit of the basic science. So I’ll try to make it as simple and clear as possible. (I know, you hated science class, but it is really very simple.)
We live at the bottom of a very deep ocean, an “Air ocean”. We all know about the earths water oceans, those big deep places that water accumulates. Well we live in something very similar to those but instead of water, air accumulates, and not just in the “deep” places, but over the entire planet, held by gravity. In our water oceans, the deeper you go, the more weight of water is above you and so the pressure goes up. Air does the same thing.
The difference is, a liquid, in this case water, cannot be compressed. While a gas (Air) can be.  So the deeper you go in the water ocean, the pressure goes up, but the waters density does not. Visualize block of hard rubber, no matter how hard you squeeze, it doesn’t get smaller. In our “gas ocean” it’s much different, because a gas can compress with pressure, so the gas at the bottom is much denser than the gas above. Visualize a rubber sponge, the more you squeeze it, the smaller and denser it becomes.
Now, because we are at the very bottom of this “air ocean”, where the air is compressed by the weight of all of the air above, we are used to “dense” air. Which is OK, because we have evolved to function very nicely on this dense, compressed gas we call Air. You have heard the term “sea Level”, that is, as it sounds, where our water ocean begins. As gravity pulls everything towards the center of the earth, heavier object sink to the lowest point (I know, DUH!) the deepest point in our water ocean is about 7 miles, but, If we measure the depth of our air ocean, it is around 65 to 75 miles deep. Sea water is 748 times the density of our air at sea level, this means every 33ft / 10 meters of seawater weighs the same as 75 miles of air. The weight of our atmosphere at sea level is 14.7 Pounds per Square Inch (PSI) or 101.3 Kilopascals. (kPa) (For the metric side of the table) That’s like having a very large house cat laying on every square inch of your body. Given the average person has between 2300 and 3100 square inches of skin, that’s a lot of cats and a lot of pressure. So, why do we care about the pressure? 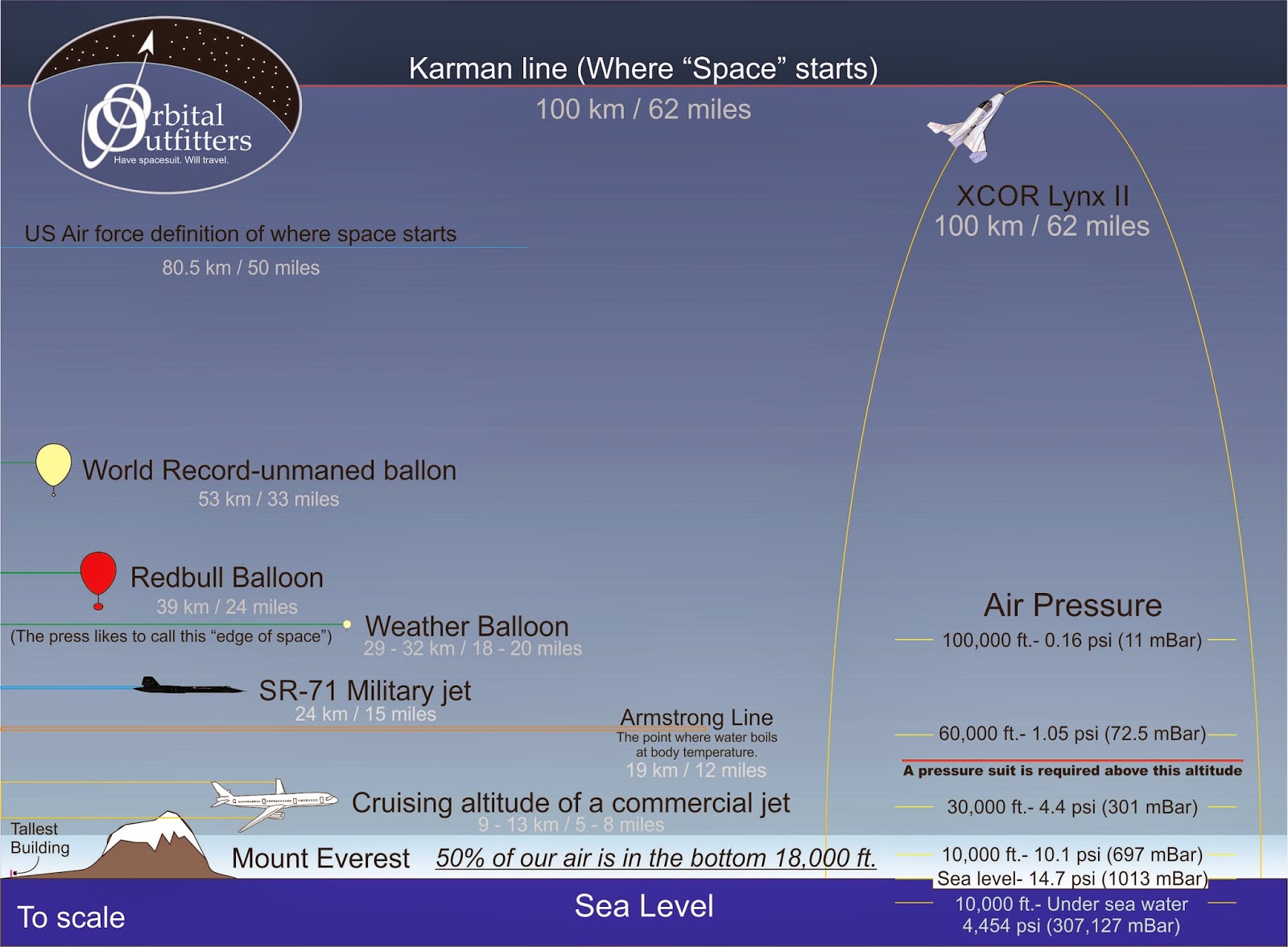 Our Air is made up of many different gasses, but for now, Oxygen, Nitrogen and Carbon Dioxide are the three we care about here. Nitrogen makes up 78%, or over ¾ of our “Air”. Oxygen accounts for 21% less than ¼. That leaves 1% for all the other gasses. We only use the Oxygen, referred to as O2. The Nitrogen (N2) is “filler” and we don’t use it for bodily functions. So when we breathe in, less than a quarter of our lung capacity is filling with the only gas we need to survive O2. But because we are at the bottom of the air ocean, this O2 is pretty dense, so we are OK with that percentage. In fact, at this “sea level” density if we were to breathe pure oxygen, it would kill us. To give you an idea of how “squishy” gas is and how it compresses and gets denser, remember me saying our atmosphere was between 65 and 75 miles thick, well if you weighed the total amount of our atmosphere, 50% of it is in the bottom 3.5 miles and 90% is in the bottom 10 miles. (For more detail about our atmosphere: http://en.wikipedia.org/wiki/Atmosphere_of_Earth)
Given these facts, most of us cannot function above 27,000 feet without additional oxygen. (There are some humans that have developed the ability to function at very high altitudes without additional O2)  This is why in a commercial airplane, they have those little yellow masks that hopefully you have never had to use. They are there in case of a cabin depressurization. They will supply you with pure O2 so you don’t pass out . This emergency system works great at altitudes below 35,000 feet. However, above 52,000 feet humans run into another issue.

Enough to make your blood boil!

As you lower the pressure around a liquid any gasses trapped in that liquid will come out of the liquid. As you increase pressure on a liquid, you can trap more gasses in it. You see this happen when you uncap a carbonated beverage. Once the cap comes off and the pressure drops, the CO2 bubbles out. Another way you can get gasses to come out of a liquid is add energy in this case, heat. When you boil water, this heat energy causes gasses trapped in the water to come out, this is the bubbling or “boiling” of the water. If you lower the pressure around the fluid, it requires less heat for water to boil. At sea level, water boils at 212 F or 100c. In the city of Denver Colorado, the altitude is 5280 ft or 1609 meters, the pressure is about 15% less than sea level and so water boils at only 202 F/ 94.7C. At Everest base camp (5,545m or 18,192ft.) water boils at only 177F /80C. At the summit 29,029ft / 8848m it drops to 154F / 68C. Well, by the time you get to 52,000 ft, water boils at 97.6 f/ 36.5C or 1 degree below your body temperature. Oops. So even if you had an oxygen mask on, the gas couldn’t get in your blood, as they would already be trying to boiling out. This would result in you suffocating and dying from oxygen starvation and no, you do not explode! (Sorry Hollywood) Now take note, your blood boils at only 9.8 miles, space doesn’t start for another 52.2 miles. But don’t worry long before this happens, you would get altitude sickness, and likely die from symptoms like fluid in your lungs, fever, swelling of the brain, Nausea, Retinal Hemorrhage. However, if you were suddenly exposed to the vacuum of space, as in 2001: A space odyssey or Jim LaBlanc, (http://www.wimp.com/totalvacuum/) you could survive. Your body tissues would swell to perhaps twice size, making you look like a body builder. But because your skin is very strong, your swelling is kept in check and internal body pressure would keep your blood from boiling. However, saliva in your mouth would boil, but as long as you didn’t hold your breath, as this would rupture your lungs, you have about 15 seconds before your brain starts to starve for oxygen and if your were repressurized quickly enough, you could survive.

The Pressure is on

So as you can see, the human body is set up to live at the bottom of Earth’s air ocean and we don’t do so well near the surface (Near space) This is why we need pressure suits. Because without them, our bodies cannot hold oxygen in our blood and our systems can’t cope with the lack of physical pressure around our body. There are two ways to add the pressure to the body, with a fluid, like gas pressure suits or by mechanically squeezing the body known as a Mechanical Counter pressure suit.


Next: How best to squeeze the body…
Posted by Chris Gilman at 10:01 AM

Email ThisBlogThis!Share to TwitterShare to FacebookShare to Pinterest
Labels: Space