A few years ago I posted a bit about this armour, but I thought I would start a specific thread on it, now that I'm working on it again (I took time off the restore my dad's race car for it's 40th anniversary)
It is a copy of a Greenwich armour with medium decoration. Most closely styled after the armour of Sir Thomas Sackville, Lord Buckhurst. The "Buckhurst" armour that is currently in the Wallace collection. (A62) 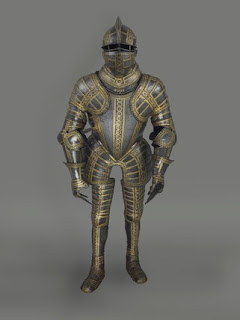 There is a nearly identical armour at the Metropolitan museum in NYC, 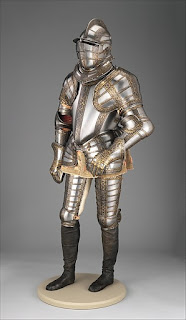 Also a half armour in Art institute of Chicago. (this was recently featured in the NOVA special) 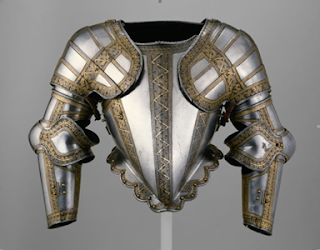 I commissioned Robert MacPherson (Mac) in 1999? for this armour, but during it's construction Mac injured his elbow. So it sat for awhile. About 3 or 4 years ago I approached Jeff Wasson about finishing it. At the time, approximately 70% of the main suit was complete, but I really wanted a full garniture so there was quite a few pieces left to make.
The suit is being made from 1050 and will be fully heat-treated, acid etched and either gold plated or fire-gilded, then salt blued.
It will consist of: the full suit, with burgonet and falling buff, like the two complete extant suits. In addition, there will be a close helm with interchangeable field & joust visors, reinforce breast, grand guard, couter, manifer, & Locking gauntlet.
As of now, all the pieces are formed and about 70% are ready for heat-treat. Last year, Jeff has delivered the the cuisses, greaves & gauntlets, which I have already heat- treated.
I am currently working on the etching process. Due to my lack of drawing skill, and the massive amount of etching on this suit, I decided to use a computer to generate the artwork. To start, I trace the etched patterns from closeup images of the extant armour and then use a plotter/cutter to cut vinyls as a mask/ resist. This is working very well and I can maintain the very fine hand drawn look, but pretty quickly make the hundreds of inches I'll need for all the boarders. In some places, I have made masking tape patterns of the sunken boarders where the patterns need to match specific curves or tapers, I scanned those patterns and using Corel Draw have adjusted the artwork accordingly.
For the etching, I'm using the same etch paste recipe that was used on the replica breast & back that Jeff built for the NOVA special, copper sulfate, salt & vinegar. This recipe I understand was derived from a period source and translated into modern chemicals by a scholar who specializes in medieval chemistry. Perhaps Jeff will chime in with additional info here.

To create the artwork, I am using a Microsoft "Surface" so I can draw on the screen over hi-res images of the real armour. I figured, for me, this would be the best way to capture the correct style. I'm creating the artwork in Corel Draw, a program I've been using for nearly 30 years. (I highly recommend it) Then I'm using a "Zing Orbit" desktop vinyl cutter to cut the masks. 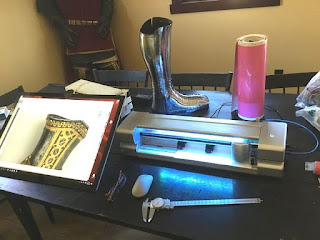 I had some old vinyl left over from "Power Rangers" , (Pink-PR) but it was too hard to "weed" (remove unwanted vinyl after cutting) so I bought some from Michel's art supply and this is working very well. I'm going to order some higher quality stuff and try that, but at the moment I have been tackling the etch process and how well the artwork translate to the final etched metal. I am very impressed at how small this cutter can cut and it's accuracy. Here is the cut mask on the metal:
I'm also using an oil-based paint pen for dots. This still needs some experimenting. 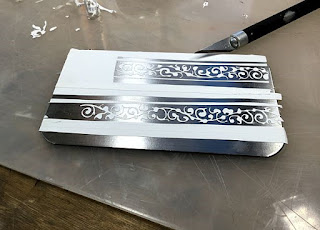 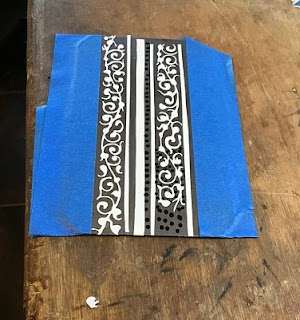 So, as I said, I'm using an etch paste made of 2 parts - Copper Sulfate, 1 part -Salt, and enough Vinegar to make a paste. 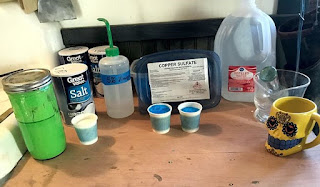 When I did the first test, I was using the old vinyl and it was easier to "weed" the "vine" part and leave the background. So I used the vinyl as a paint mask and used Krylon spray paint as the etch resist. When mixing the etching compound, I just wet the "sand" textured salt and CS with enough vinegar to make a grainy paste. I used 2 applications of paste for 60 minutes each. Test one: 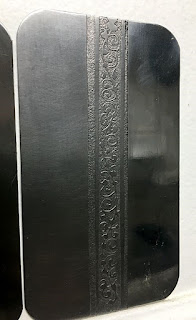 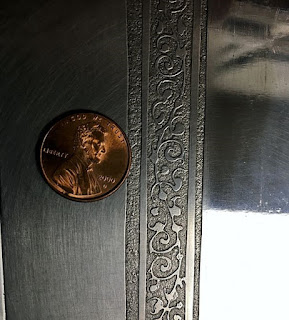 The graininess is an issue as the real suits etch has a nice smooth background, no real texture. Because the background was so "pebbly" I figured I would need to grind the salt and CS finer. I had a nice mortar & pestle from Historical Glassworks so I gave that a try. After considerable work, the mixture was not significantly finer. But, while at Micheal's for the new vinyl, I picked up some "Armor etch" acid paste. That's gotta work Right?! Here is that test. You can see the graininess of the green past, the "armor etch" is the white material. 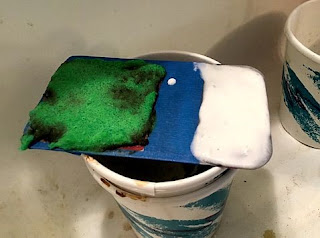 This test was over an all paint pen artwork and the Armor Etch was not very effective. So I have relabeled the bottle "Not, Armor Etch" This test was not useful as the paint had not dried sufficiently and was mostly obliterated while washing off the first application of paste. But I did notice how much crisper the etch was where I had masked the plate with a piece of vinyl. It also turned out, the new vinyl was easy to weed once the cut vinyl had been adhered to the metals surface. So the next test, with the finer ground material, the paste was applied over the cut vinyl. Test two: 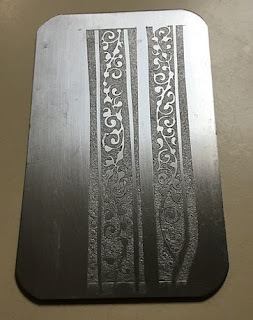 I also thought the etch needed to be almost twice as deep, since in the close up images of the Buckhurst, you could see a significant shadow caused by the etch depth. My etching didn't seem to be nearly this deep. So, I'd try 2 things; First, leave the paste on much longer. Second, get some stronger vinegar. Household vinegar is 5% acetic acid and I found 30% concentrate on Amazon, but I also found some 99% acetic acid, so I ordered that. Now as the strength goes up, so does the dangers with acid, so my plan is to cut it to 50% as soon as I get it.
I also did another test, this time leaving the second application of paste overnight. It cut deeper, but the texture got worse. Test Three: 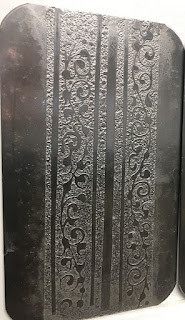 This was going in the right direction, but I had solve this textured background issue. Chemistry was not a subject I was excited about in High school, so I had to look up if water was a solvent for Copper Sulfate. It is of course, and I realized my error; I needed to fully dissolve the crystals into solution before using them. I mixed the salt and CS with distilled water and after 5 minutes of mixing, I had a creamy green paste. I had also distilled some vinegar by boiling it on the stove, in an attempt to increase the strength. I added this to my paste, so, because of the distilled water added to the mixture, I figure I was likely back to 5%+ concentration. This worked very well. No serious texture and it was starting to look like the real thing. Test Four: 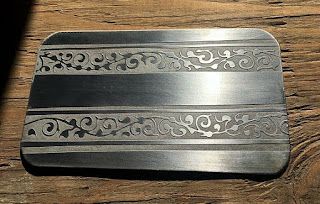 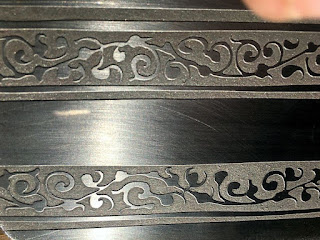 In the closeup, you can see how fine a line the vinyl will "protect" from the etching paste. I may try heating the paste a little.

Since the water dissolves the copper sulfate fairly quickly while mixing, I found I could make up a batch of the paste and let is sit over night and the crystals would dissolve into a smooth paste. I store it in a glass jar, but I need to find something with a non metallic top for long term storage. Here is the paste: 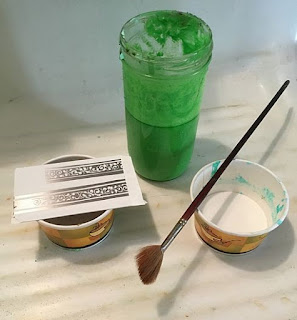 I had been using a tongue depressor to apply the paste, but this batch was a little thin, so I tried a brush. It turns dark brown upon contact with the steel. I added another batch of salt & CS to thicken the paste. 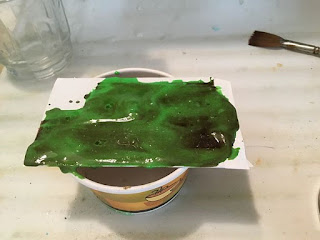 This works well on these small areas, but I really need to see if I can control the etch on larger areas.

Next: Creating artwork for the center greave and testing the bigger patterns.