At this point I have done well over 60 tests of formulas and application times of this period etching paste, but I'm still very frustrated by the inconsistencies of my results. Something is affecting the cutting ability of the paste, and I have not pinpointed what it is. There have been very few times in my 40 year career of learning a craft, that I have encountered something that, while it works, it does not work as well as my gut tells me it should or as constantly as it should, within obvious parameters.
In all of these experiments, I have been guided by research originally done by Jonathan Tavares and Robert MacPherson (Mac). In  Mac's research, he has gathered together many sources and recipes here. While Mac's research shows a variety of recipes, with a wide range of ingredients, it seems the copper sulfate / salt & vinegar shows up a often. It is also the one that Jonathan Tavares used for his etching, for the Nova special "Knights In Shinning Armour".

Mac's research shows one of the additional ingredients for the C.S./salt & vinegar recipe is charcoal, so this is why I have been trying it in the more recent tests. So far, I have been creating my paste batches using volume as a measurement. With the inconsistent results I had been getting, perhaps I'm not being as accurate as I need and I'm sure my notes have been insufficient.
For the new tests, because I was going to make very small batches, and in an effort to be more accurate and consistent, I switched to proportioning my ingredients by weight.
In switching to weight, I overlooked the fact that C.S. and salt are much denser (heavier), than an equal volume of charcoal. As a result, these small batches, now proportioned by weight, ended up with significantly more charcoal than my past mixes. At first I thought, this was way too much charcoal, but I figured, since they are already in the cup, I may as well test them as they are.

Turns out, of the 15 different formulas in this test, the best results came from the recipe with the large proportion of charcoal:
This is the formula that etched the deepest:
20g - Copper Sulfate
20g - Salt
5g - Bone charcoal (same granular size as the CS)
5g - Activated charcoal (Powder)
15% vinegar (to wet to damp sand consistency)

This paste etched deeper and was less damaging to the resists than the others.
In hindsight, this was nearly 4 times the volume of charcoal than my previous recipes.
I did another small test and got the same results, so I decided to etch my next piece of armour, the right cuisse.
Here are all the pieces "masked" off with the vinyl and asphaltum dots. 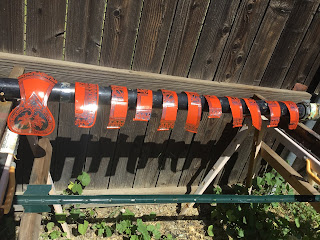 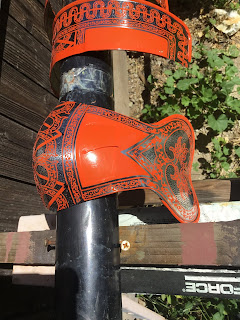 With the amount of surface area and the necessity to apply three consecutive batches of paste,this meant I would be mixing up one of the largest batches I have made. So I estimated a volume, 40 times my sample batch.
800g - C.S.
800g - Salt
200g - Bone charcoal (same granular size as the CS)
200g - Activated charcoal (Powder)
600g - 15% vinegar
Outside temp was 92f / 30c
(While the pieces were initially in direct sun,
I put up a piece of plywood to shade them.)
3 - 90 minute etches

The results were fantastic!
Very deep etch, very little damage to the resists (In fact no repair required)
EDIT-Current formula (as of July 2021) After over 100 tests and 99% of the armour complete, the formula I'm using now with satisfactory results is:
100g fine salt (Salt flour)
100g Copper sulfate fine crystals
25g Bone charcoal
13g activated wood charcoal
Distilled water to make it a thick paste.
The reaction with the salt, will cause the material to freeze, so after mixing, you need to let the paste sit for and hour or so, and then t\remix it. NOTE: Do not make your initial mixture too wet, as after you remix it, the salt gives up some water, and the paste gets wetter.
If it is too runny, you can add charcoal to thicken. I have found 3 or 4 90 minute etches (fresh paste for each) gives you considerable depth, equivalent to late 16th C armour. 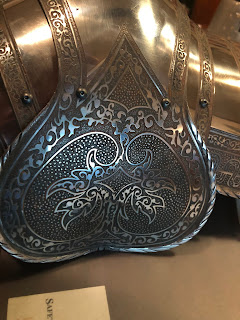 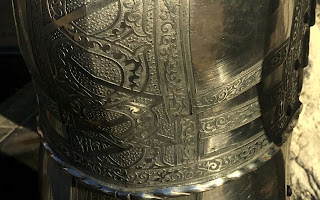 Now this etch depth is more in line with the real armour. Because the Buckhurst armour has a painted background, behind the central gilded area, a very deep etch makes adding paint to these backgrounds much easier.

While I'm delighted with the success, I'm still not 100% convinced it is only the charcoal content that is giving me this great result. I also suspect the temperature may have something to do with it. Because of my scant notes, I'm not sure if my earlier successes were a result of a warm sunny day.

But, given these stellar results, I started on the left cuisse.

Of course, as soon as I get the left fully masked and ready to etch, the weather in Southern California is overcast and drizzly, for the whole week. Then, we get some nice warm days and I get tied up with real work. Finally a sunny warm weekend and I'm able to etch the other leg. Using the same formula I apply the first batch. But this time the asphaltum resist, is not surviving perfectly as it did previously. WHAT THE H#$@!^

I'll have to reapply dots. While I have gotten pretty quick at this, there are 2400 dots just on the knee. This puts me back another day so I can make sure the dots are fully dry. The second two applications go well.
But, during the cleaning of the paste, I change my approach. I had been carefully scraping a majority of the paste off with a tongue depressor into a bucket, and then rinsing the remaining paste off under running water. I had been doing this to avoid washing too large a volume of CS and salt onto the ground or into the drain. However, I was now concerned with damaging the resists and was not enthused with the idea of another ten thousand dot repair job. So I used just water on a couple of pieces to see how this affected the outcome. While one of these pieces was under the running water, I saw a glint of copper within the volume of paste. Upon closer inspection, I could clearly see metallic copper crystals forming up into the paste, away from the steel.
That was the aha moment.

What is the most important part of a sponge? The holes.
I had been adding the charcoal as an "ingredient", but now, with the increased volume, it was more of a "filler". The result was, the metallic copper was no longer forming directly on the steel surface, blocking the effectiveness of the paste. The copper was now being drawn up into the "holes" the charcoal was providing, keeping the steel surface clear, allowing the paste to remaining active and aggressive. I had not noticed this earlier, because I was scrapping this formation off. When the copper is drawn up into the paste, it also means the paste can be left on much longer and still be effective. This now explains the other thing Mac's period sources say, which is too apply the paste a small fingers width in thickness. When the copper was forming on the steel, and keeping the paste from working, it was clear to see this extra paste thickness was being wasted, something one wouldn't expect from a period process, the wasting of material. Now, all of the "finger thickness" of paste was being utilized. The second aha moment.

Other than why the asphaltum dots came off on the second leg, and not the first, I feel I finally have a handle on making this paste work consistently and effectively. I plan to test the limits of paste application times by doing multi hour tests, but for now, I'm confident I can move on.

Both legs are now completely etched and I'm pretty happy with the results. 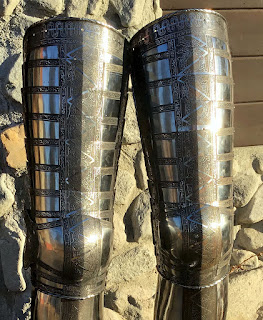 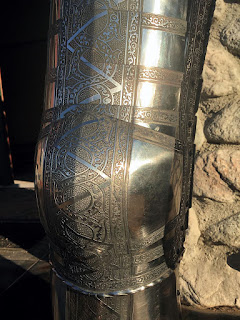 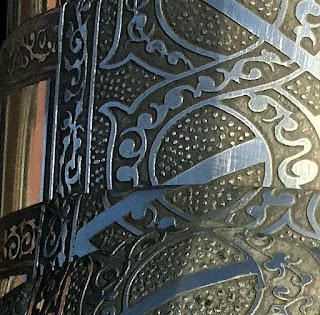 The etching I see on extant armour seems to show etching depths increasing over the 16th century and by the 1580's the etch depths are significant. There also seems to be less etch depth on Italian armour than on German armour. With my findings, of what the charcoal is doing, I'm wondering if this same "discovery" happened over many years in the development of this paste. Or the different workshops handing down what they knew, resulted in one formula being more effective than another.