Greenwich Armour: The work to get to this point.

As I stated in an earlier post, this armour was started by Robert MacPherson (Talents I have seen) and after an injury, Mac was unable to continue with the armour. Mainly because the work left to be done was all of the "heavy" work, the thicker jousting pieces and sinking all of the surfaces than needed etching & gilding.
Jeffery Wasson took up the challenge of completing this massive project. Massive, in that, not only was this a complex, advanced late period armour, but it was also a complete garniture. That being an armour with multiple separate components to allow the armour to be configured in multiple ways for different specific uses. In particularly, jousting.
For jousting, the Greenwich armours had additional heavy reinforcing plates that mounted over the main armour in order to improve the safety of  riding head to head with another jouster, who was trying to hit you with a metal tipped heavy wooden lance.
Imagine riding on the freeway in the back of a pickup truck and leaping out into a street sign and hitting the sign post. The impact is tremendous. So to help keep the guys from getting injured (or killed) heavy plates were affixed over the base armour, which helped tie loose appendages together to keep your arm from being dislocated or your neck broken.
Just like modern sports, jousting evolved over time with changes in rules and improvements to safety, usually motivated by serious injury or death. So by the late 16th century, jousting armour was pretty sophisticated and substantial. To the best of my knowledge, this is the first  replica of a complete Greenwich garniture built in at least the last 100 years (I'm not sure if any replicas were built during the Victorian period) So there is a lot to learn by trial and error in recreating these parts and making sure they interact with each other in the correct manner.
Here are some images of this process (work by Jeff Wasson):

The garniture has two helmets and 4 visor options. The burgonet has a bar grill and a falling buff and the close helm has a tilting visor and a field visor. The close helm locks onto the gorget, via a rolled top edge on the gorget and the ridge you can see on the bottom of the close helm. When properly made, the rotation is effortless. 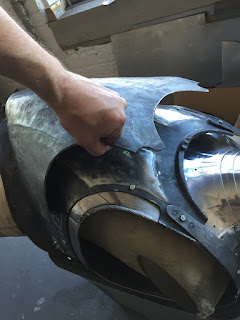 Email ThisBlogThis!Share to TwitterShare to FacebookShare to Pinterest
Labels: Armour