The flatbed truck showed up at the house one morning with a silver gray Fiat chassis on it. There is something satisfying in seeing the car all clean down to bare metal. There where remnants of Charlie's Bondo work around the fenders and of course you could now clearly see all the areas that rust had eaten away. Since I had not built a dollie or wheeled frame to move the chassis around on, I screwed a piece of plywood to the bottom of the car to help protect it from dents, and make it easier to drag around. The flatbed driver an I tried to slide the car, but it wasn't moving, but a little application of physics, by putting a piece of steel tubing under the plywood and it rolled onto the trucks lift gate easily. Once I got it in the garage, it would get jacked up and put on jack stands.

In the garage and on stands I took inventory of the damage. The car had been covered by a tarp, and under a awning, but it was still outside for 11 years. The trunk lip was rusted and the drivers rocker would need to be replaced. There was damage to the passenger compartment floor as well as other areas here and there where water could puddle.
As I walked around the car drinking my coffee, I found my self sliding my hand along the Fiats body, thinking about how my dad loved building things. I had never seen the car like this, all monotone gray, because when the old man added all of the roll cage and other bits, the car still had its stock dark blue paint. So when the car left for paint, it looked a little "Mad Max" with its raw steel tubes and scorched paint from the welder and cutting torch. Now, all bare metal, you could see all of the areas he had added stuff and I thought, how in the world did that broad shouldered, 50 year old guy, get into that tiny spot and TIG weld that roll bar? 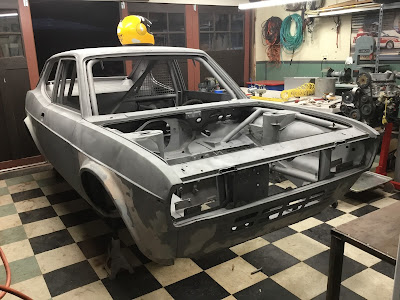 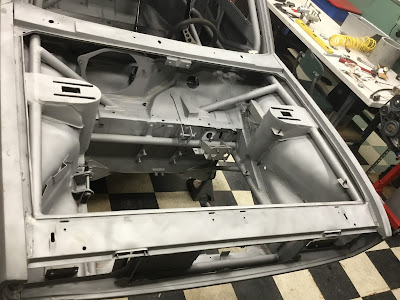 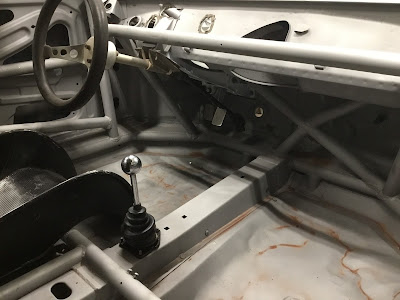 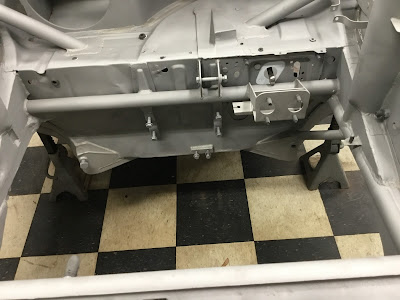 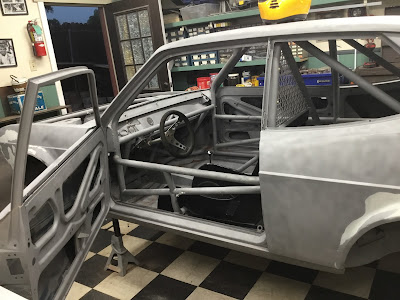 As my hand slid across a panel, I'd feel a slight depression that shouldn't be there. After an hour or so, the car had penciled circles all over it. I was probably worrying about things you would never notice on a white race car, but this was the time to do the work and I kept thinking the old man would have wanted these to be fixed if possible.
In my movie prop career, I've used Bondo (body filler) hundreds of times and had to finish surface's for higher scrutiny than this Fiat would likely see, but, this was actually the first time I was using Bondo for it's intended purpose, fixing dents on a car.

First thing though was metal work. The rocker panel needs to be cut out and the front air dam needs tabs welded in where old one have broken out and there is the trunk lip to replace. At my shop, I have sheet metal forming brakes and rolls, a TIG welder and plenty of fabrication equipment of all types. But in my garage, space is limited. So its pattern here, fabricate at the shop, then hope it fits without too much fuss. The rocker panel and trunk lip should be pretty simple. I made two rockers, just in case I needed to replace the passenger side as well.
Funny how when you have certain equipment, like a 5 HP 2 stage air compressor and a full line of air tools, you develop ways to do things, that, when you don't have those tools, you have to come up with new ways. If I had room at my shop, I would do this there, but building space in LA has gotten very expensive. At home, I do not have these tools, so a Bosch jig saw made short work of the rocker panel and electric grinders in place of air tools. These are bulkier, but they wok well.

One thing I do have is a full armour shop here. One of my hobbies is medieval history and armour. So moving metal around into very specific shape is something I am very familiar with now.
Because, one thing I wanted to fix, was an error in judgement my 16 year old self had made, in the amount of distance behind the company truck, and the Fiats right front fender. Boy, that was one day I didn't want to see my old man. He never got really really angry, but I knew he wouldn't be happy about a dent in his brand new race car. Lucky for me, the dent wasn't too severe and because the Imron paint was so tough, most of the dent "popped" out and it required only a tiny bit of repaint and being white you couldn't see the remaining dent unless you knew it was there. But, I know my dad knew it was there. So, at least now I could fix it completely.

Another thing I needed to check, was if I fit in the car. My dad had wide shoulders, but was just around 6 ft. tall. I have wide shoulders but I'm 6'3" with a very long torso, so head room in cars is always a concern. I knew the seat was as low as it could go, so if my helmet wouldn't clear the roll cage, I had no idea what I could do. When we first built the car, Dad was pretty sure we would be under the minimum weight for this car according to SCCA rules at the time. So the seat started as a fiberglass racing seat and he added a stainless steel knee bolster and we then pt a giant trash bag in the seat and using rigid urethane foam, we foam fit him into the seat. I then fiber-glassed the whole thing. When we where done, the seat weighed 22 pounds, but we didn't care.
But when the new rule book came out, they changed the minimum weight of this car and now we looked to be over weight. So in the trash with the 22 lbs seat and he fabricated a new one in aluminum that weighed only 6 pounds. Because the car was so low and the seat was less than an inch from the floor, he was concerned with hitting a piece of debris and getting punched in the jewels. So, there is now a 16 gauge titanium shield under the seat. 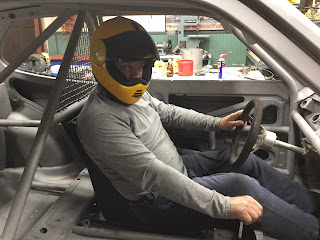 I bolted in the seat, peddles and steering wheel, grabbed my motorcycle helmet and driving shoes and put on the race car. Luckily, I fit. My legs are not much longer than my dad’s, but my feet are. I must look at the peddle area to see if I can get a little more space, so I'm not hitting the peddle box. Once I get my competition helmet and suit, I'll recheck, but it looks like I can drive comfortably in the current position.
Oh and laying off the beer will only help the situation....another thing my dad loved.

Time to start slinging Bondo and a hammer.
Posted by Chris Gilman at 7:55 AM