In order to fulfill one of the goals of this project and make this look as much like a real house as possible, I needed to concentrate on the details. As I looked at more and more paintings I needed to settle on architectural elements I could make work both as an 16th century house and in a easy to assemble structure. 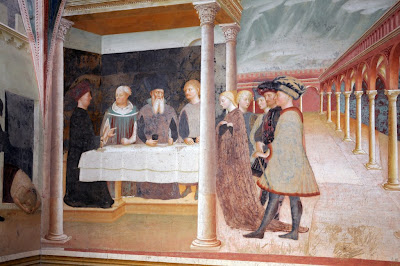 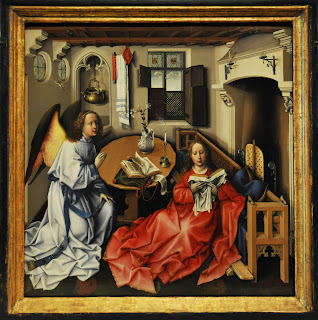 First were arches. Arches were needed for two reasons, one; many of the painting from Italy of the era seemed to have arches and two the rest of Casa Bardicci had arches. If you have arches, you need capitals and columns. This is one of the first things after the wall material I started to source. I kept an eye out on eBay as well as the movie studios here in LA.

Each Movie Studio has a “Staff shop” which is a shop that makes the architectural details for any period of film or television set, from wall textures and molding to capitals and corbels. Most of the staff shops have a cataloged with all of the architectural pieces they offer.

Now if this project was for a film, with a films budget, it would be built in a very different way. First it would be relatively temporary, made from 1x2 lumber and luan plywood, nailed together with staple & nailguns and the finished scenic paint job would make it look like a completely real structure. Well I would not be able to afford all of the normal Hollywood tricks and my structure needed to be more robust and reusable, but I should be able to pull of many of them, including hiring a couple of really good “scenic” painters to add the finishing touches to the house.

It would turn out that tapered columns were too expensive, especially since I needed 7 of them, so I settled on schedule 40 PVC pipe. The capitals I bought from Worthington Mill works. http://www.worthingtonmillwork.com/products.html
I bought one of their Roman Corinthian decorative capitals and made an RTV silicone mold with a Hydrocal (Like plaster of Paris but stronger) outer shell or Jacket of the capital. I then cast lightweight copies using a 2 part urethane plastic and filled these with the same 2.5 lb. Density foam I used on the beams. 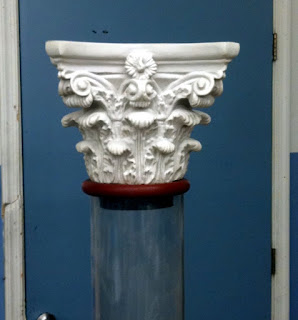 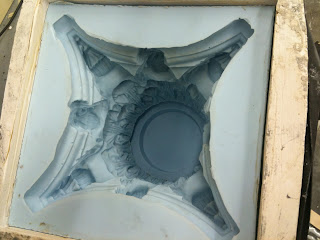 Since I had a second floor, I needed stairs. These would be placed on the opposite end from the arches facing the lake. In front of the stairs was a wall, fabricated from the 1” PVC & foam board.

Here are the stairs, traditionally built with 2x10’s and 1x8 pine. (These are by far the heaviest single element of the house. I had to install them myself a few times, but easier to install them with 2-3 people.) 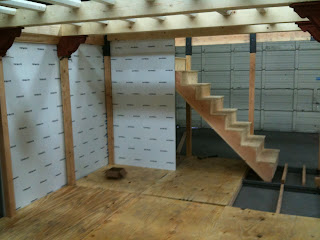 Early on I decided the downstairs needed a fireplace. In many of the period paintings you see a fireplace, I also noticed sometimes there was a cover, over the entire opening of the fireplace. This appears to be a “summer” cover or installed when the fireplace was not in use. The way they are painted it appeared t be a metal cover with slide bolt style latches. 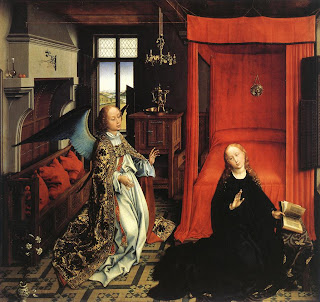 As I had a great deal of space under the stairs, this would be the perfect solution to getting behind the wall to get to under the stairs for “mundane” storage. So using the 1" PVC skinned foamboard I fabricated a fireplace onto the back wall. Again the pieces were bonded with WeldOn and temporarily held together with masking tape till the solvent cement set. For the details I used a plastic foam trim purchased from Lowes and bonded it with WeldOn to the foamboard. I added some plastic copies of small “carved stone” corbels left over from another project, then vacuum formed two corner pieces to finish off the effect. After using the Locktite caulk/ adhesive to fillet any seams, the fireplace and wall where then given a coat of “Featherfill” to add a bit of “plaster texture”. “Featherfill” is a polyester based sprayable build up coating used in automotive body shops to fill in small surface imperfections over large areas.

Here is the fireplace wall fitted in front of the staircase. 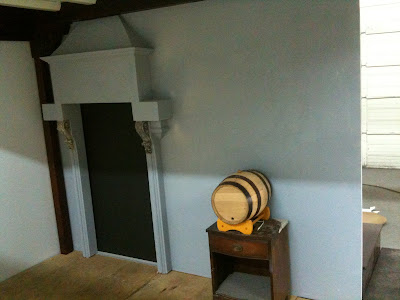 (The barrel is to become a "Jockey box" for the beer keg that will be located beneath the stairs.
The side table it’s on is a stand in for one of the correct period I’ll build)

I also noted in 15th & 16th century paintings, that the corbels most often were longer across the ceiling than down the wall, something that is the opposite in later architecture. I found a set of 2 oak corbels on ebay for about $75 and I added some additional pieces of wood to make them work horizontally (instead of the intended vertical orientation) Again using RTV silicone, I made a mold, this time with a wood “jacket” or matrix and cast these in the same manner as the capitals. 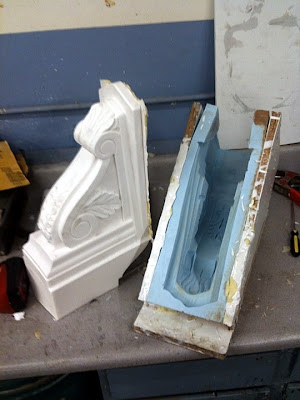 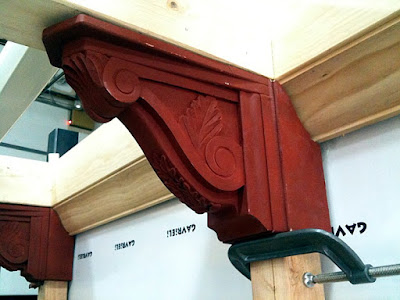 Because silicon is rather heavy and has little surface tension, it flows into every tiny detail of the surface being molded. Because of this it will faithfully capture all the detail and nuances of any given surface. Also silicone usually doesn’t stick to anything, with the exception of itself and glass. This is why, in the movie industry, we use it as the default mold material to make copies of many things.

The resulting corbels have all the wood grain detail of the original oak corbel and once painted will be practically indistinguishable from the real thing. 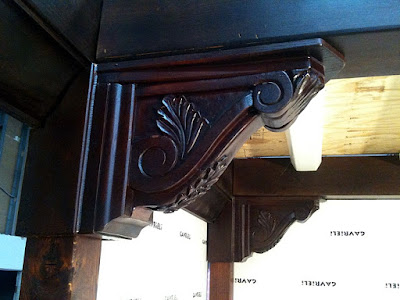 To attach the corbels I embedded a piece of aluminum “T” material in the top of the corbel and made a “shoe” from some steel angle and strap stock, that this aluminum could slide into. This meant no tools for installation. As these slid in, they also trapped the fascia pieces I made to hide the metal brackets and 2x10’s of the main frame.
Posted by Chris Gilman at 8:04 AM