Long before computer operated mills (CNC) all of this was done using "a meat computer"; the guy turning the handle, knew how far to turn it.

As a kid, I hung around my dads aerospace machine shop, and watched guys on old Bridgeport mills, turn blocks of metal into amazing mechanical shapes.

The main hatch of the Apollo Command module, that took men to the moon, was a beautiful piece of mechanical art. Fabricated by guys like the ones who worked for my dad. These unassuming guys, in their plaid shirts, oil stained leather aprons, cigarette in their mouth and a cup of coffee on a nearby bench, created the millions of parts to America's Apollo Spacecraft, with no computer operated machines, just their skill and experience.

Know as the "The Unified Hatch", this was a 350 pound, quick opening "vault door".

It was called the unified hatch, because the original design, was actually 3 separate hatches, all of which had to be opened by the astronaut, in order to exit the spacecraft. After the tragic accident of Apollo One, in which a fire developed so quickly, that opening these hatches was impossible, NASA required a new design that could be opened quicker.

The redesigned hatch could be opened in around 3 seconds, and get out of the spacecraft in less than 30 seconds. A great improvement over the 60-90 seconds for the original design.

Utilizing 15 latches, a mechanical gearbox, a counterbalance system and a gaseous nitrogen operated piston, this was an incredible piece of engineering and machining.

In early 2019, I was talking with one of my clients, who had purchased one of my replica Apollo spacesuits, about the amazing accomplishments of America's industry, in designing and creating the massive amount of technology and hardware for Mercury, Gemini and Apollo spacecraft, in only 9 years. We both were fascinated by the spacesuits the astronauts wore, but at some point in the conversation I brought upon the Command Module hatch as one of my favorite pieces from the spacecraft. He agreed and I mention how I had wanted one, just to hang on my wall, to showoff  the skill of the 1960's machinists I admired as a kid. He said it was one of his dreams as well, them paused, and asked, "do you think you could build one?" At first I thought, no way. Those guys were far more skilled at machining than I'll ever be, but then realized that much of their skill and experience is sort of "captured" in the computers that run CNC mills and lathes today. For 40 years, I have been building things for film, museums and some for aerospace clients, and I thought well you have figured out complex projects in the past, why not this.

I told my client, that I thought I could....but it would be very expensive. He asked how much. I gave him a ballpark, thinking I could wriggle out of telling him I could build this, and he said, OK, think about it and give me a formal quote.

Once I had the check in my hand, I realized there was no way of getting out of it. So, like with any project, you start by gathering images and information. Having spent 30 years building replica space hardware, I have become friends with a number of retired aerospace people, and collectors. I have built full size Lunar Modules, both interior and exterior, along with replica's of just about every spacesuit that has gone into space. But, I hadn't done anything from the Command Module before. Well I had to start somewhere, so I reached out to my usual sources. Information was slim, but I did manage to acquire some original drawings and spec sheets on the hatch, alone with some high quality images of the individual hardware elements. There was also an Apollo hatch near me in the California Science Center, which I have done work for.

One big advantage I had (which had not occurred to me initially) was having grown up around the type of shop that built parts like this, I was recognizing machining details, edge treatments and surface finishes as I was looking at the photos.

The original hatch locking system was mostly machined stainless steel, with the body of the hatch made in aluminum. Since the intent was to hang this on a wall, I wanted to reduce the weight as much as possible, while still keeping it in machined metal. I also wanted the latches to function. So I would have most of the hardware machined from aluminum, and experiment with various finishes in order to match the original hatch.
The parts where drawn in Solidworks, a complex 3D engineering software. I had had limited experience with Solidworks, and self taught, so I new this was going to seriously test my skills. I started with some of the simpler parts and 3d print test pieces. I got a email one day from a friend who is incredibly knowledgeable about the Apollo Luna Module, and he said he had been looking into a source for information on the hatch.
It turns out, Andrew Barth, and engineering student, working with Adam Savage (Myth busters fame), decided to scan the Smithsonian's hatch and build a replica. But, this replica was to be made by dozens of different artists around the US, and out of a wide range of materials. The model files were posted on the Smithsonian's site, under free license for anyone who wanted to print a copy for themselves. The files were all solid .STL files, and were not useful for machining a working replica, but like the photos and drawings I already had, they where a useful source for information to assist my Solidworks drawings. Also, since the files were intended to be 3d printed, there where many parts that grouped together multiple parts, and had cavities which could not have been machined.
In the end I did about 200 drawings in Solidworks. The parts were jobbed out to CNC machine shops and as I received them, I did some machining operations for minor corrections, and edge treatments. This is where my experience in my dad's shop came in handy. The parts needed to look like they had been machined and surface finished with 1960's aerospace conventions and standards. So I did dozens of tests and various parts in order to get the appearance of the parts correct. My client wanted an "as new", or "just flown" look, so I didn't want too much aging or surface patina.
While some parts of the real hatch are made from aluminum, the parts that needed to look like stainless steel, I had electroless Nickle plated and then tumbled to match the stainless steel look of the originals. I also sourced correct cruciform, high tolerance bolts, to match the original bolts used on the real hatch. (Some cost $25 each)
I wanted the latches to function, and as an added feature, I powered them with a remote control servo, so with a press of a button, you can lock and unlock all 15 latches. 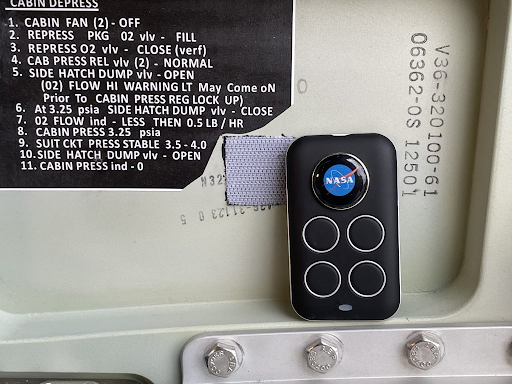 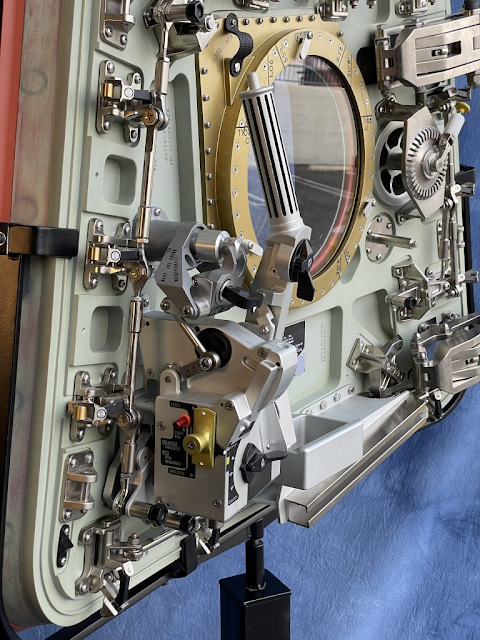 For the exterior my client wanted it to look just like the freshly return spacecraft. At first this was tricky, because the real hatch, looks a bit "Fake", with it discolored chrome "mylar" outer layer. In researching the original specifications of the lunar mission hatches, I learned they were covered in aluminized Kapton. Kapton is a plastic that has a very wide operating temperature, and is transparent amber in color. The "Gold Foil" you see on the outside of the Lunar Module, is neither, it's not gold, and it's not foil. What it is, is Kapton, that has been aluminized on one side, and because it's transparent yellow, when viewed from the other side, it appears gold. It turns out, the Kapton on the exterior of the Command Module (CM), is Kapton that has been aluminized on both sides, and the yellow discoloration on the recently reentered CM, is where the aluminum micro-thin coating has burned off.
Well, lucky me, because I just happen to have, original, double metalized Kapton film (found on eBay years ago). After coming up with ways to "burn" off the aluminum, it was nearly a perfect match to the original.
I have made 5 of these, and have 3 still available. (as of this publish date)
If interested, please visit, Orbital Surplus for more information. or email chris@orbitalsupplus.com
Posted by Chris Gilman at 7:02 AM No comments:

Email ThisBlogThis!Share to TwitterShare to FacebookShare to Pinterest
Labels: Space, Things I've made

After nearly 4 years of decoration, the Greenwich armour project is nearly complete.

I have the burgonet, falling buff and locking gauntlet to complete, but all of the other pieces are finished.

Here are some images of the finished pieces, and some in progress shots. 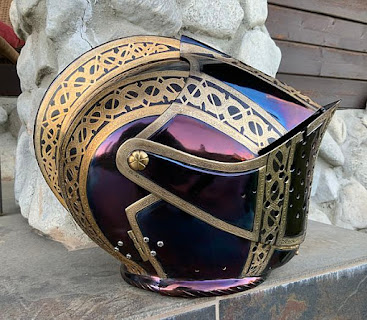 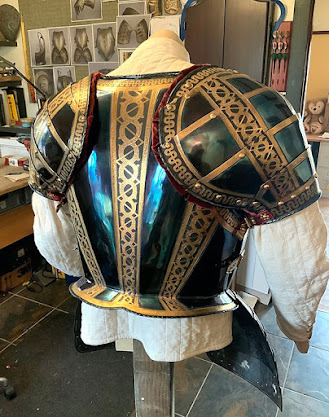 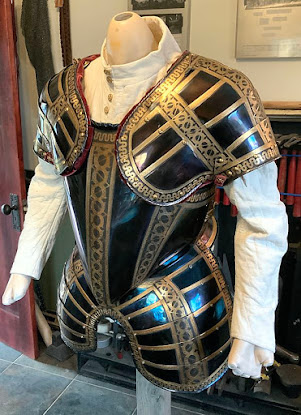 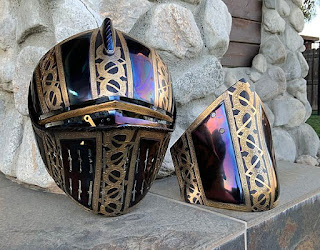 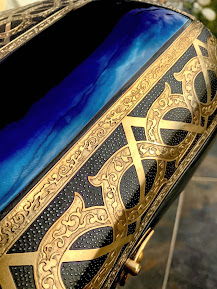 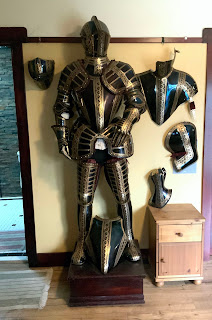 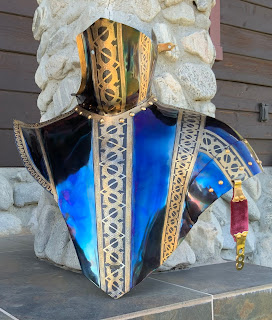 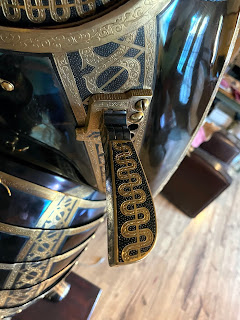 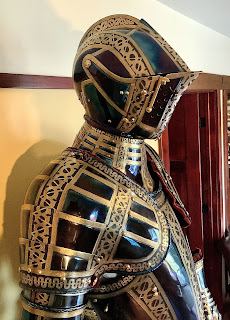 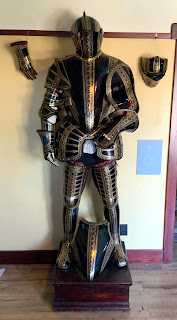 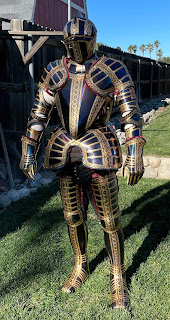 Here is a little info-graphic I made to illustrate the steps I used to decorate each piece of the armour above. 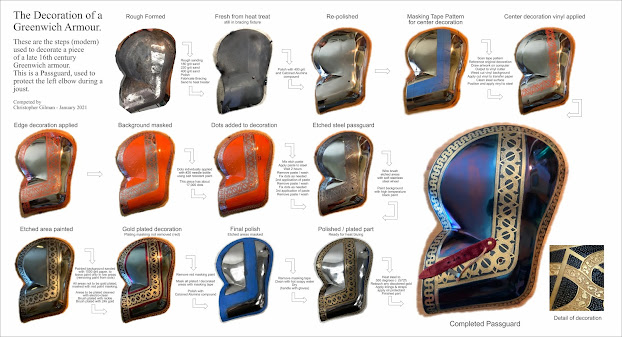