The Polish Eagle Racing Team & the Fiat 128ski will be at Lime Rock, but, I'm waiting for parts...

I received an official acceptance letter from the Lime Rock Historics and my entry is confirmed. So baring any unforeseen circumstances, the Fiat 128ski will make it's debut at Lime Rock in September.

However, progress has been slow the last few weeks. I did manage to check off a number of things, like machining the new swing arm pins and rebuilding the Girling brakes.
But...
The company who was plating the suspension, made everything bright chrome, not satin chrome as they had said they would. When asked how this could be rectified, he said he could nickle plate it, brush it  then lacquer it so it wouldn't tarnish. I told him no, this is for corrosion protection and I need satin or matte chrome, I don't want lacquer chipping off and the nickle tarnishing. A few days later, he showed me a sample of a brushed finish in his dimly lit office and I said OK. Once I got the pieces home, and next to the original parts that have been waiting for shocks, in order to get plated, I realized he did what I asked him not to do. He nickle plated them and added a lacquer. By the time I discovered this, pieces had already been assembled. In order to correct this, all the pieces would need to be stripped and replated and I can't wait another 3 weeks for this to get done.
When I got the dampeners back I had asked the shop not to assemble them into the strut housings, as I had to plate them. But they did anyway, so I needed to take them apart. I wanted to bring the struts right to the plating shop, however my custom spanner wrench was at home. "Well, I guess tomorrow will be OK."  Turns out, the home made spanner is inadequate to remove the glam nuts. So I ordered a proper spanner wrench and now I'm delayed two days in getting the last of my suppression parts to the plater.
Once I did get them apart,  I picked up the strut tubes to put them in a box, and a spacer fell out of the strut. Did these guys cut the shocks down? I thought I told them to nix that idea and leave them the original length? Turns out, the new dampener seals are 1.125" shorter than the originals.  I had wanted to shorten the housings in the beginning by 1.250" and decided against it. So, instead of calling me, and letting me know they shortened my shocks, by nearly the amount I had originally asked for, they just made spacers and screwed them together.
Since I really don't need, or want spacers below the dampeners, I need to shorten the strut tubes. Using my cold saw, I cut out most of the spacers my dad had welded in when the dampeners originally came from Koni, too long, and TIG welded the strut tubes back together. This will give me more space for shock travel and I may at some point change the top mountings and return them to my dad's original design. But I really need to get it together and test things before I run out of time.
After I cut and re-welded the housings I ran them over to the plater Thursday last.
The plater says, next week, so I gave him the whole week. Friday afternoon I go in, he says they will be done by 3:30-4. OK. I come back at 4:30 and...."Oh, my machine broke....my guys left early..." BULL SHIT! Not only has this guy not done the work he promised, but he has been late every time I go to pick up. I had planned on using this 3 day weekend to do final assembly on the suspension. 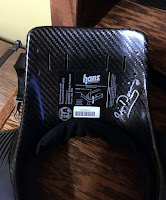 Most race organizing bodies require, or Strongly recommend, some type of HANS device for restraining your head in case of an impact. My mother has been friends with one of the co-inventors of this life saving device, and I got a surprise phone call from Jim Downing, asking how big my neck was.  I figured out pretty quickly my mom was behind this and Jim assured me "It is a gift from your mother". I have to thank Jim as well, since I'm pretty sure he sent this to me at no charge to my mom. 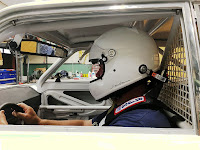 I did ask him to sign it, normally I don't ask for autographs at least not since I was a kid. Especially in my work, it's considered bad form to ask movie professionals for their autograph, but, how often to you get such a device, right from the inventor.  I tested it in the car and I think I'll need to loose the original head pad my dad had made for the car. I will consider a new one of the same design, but much thinner.

New fuel cell arrived from ATL. I had planned to keep the cell exactly as it was originally, since this was a very early ATL fuel cell, from 1973, only 3 years from when the company was founded. But, the stock modern cell was about $480 and they quoted me $1600 for a custom one to match the original.
So, the 128ski get s a modern "Saver-Cell". The cell is 3/4" taller, but a tube spacer was all that was needed and it dropped into the original metal box. 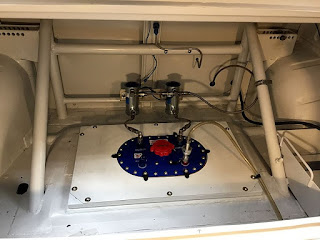 Hopefully I can get the last of my suspension parts this coming week and finally get the wheels on. I ordered tires from Tirerack, because they offer a heat cycling service. Racing tires need to be heat cycled in order to get the most life out of them. This would normally require the tires to be mounted on the car, the car driven a few, slow warm up laps, then a quick lap to get the tire up to full temp. Then the wheels should be taken off to let the tires "cure" for 24 hours before you use them. Well this would totally wreck my first test day, so the heat cycling means I can use the tires right away. These should be here next week so if all goes well, I may have the car on it wheels by next weekend. 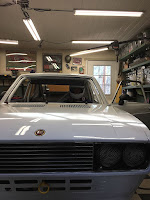 I did source a spare, stock 128 transmission, as the racing gears won't be done for some time. This will allow me to test the car and I should be able to run it in this configuration if the racing gears are delayed beyond my Lime Rock event. For this temporary solution, I need a stock pressure plate, since the racing flywheel is getting plasma sprayed and also won't be back for a couple of weeks. If I'm lucky, I can assemble the gearbox and engine and put that in as well this weekend. Then all that is left is the intake manifold repair.
I was going to leave it till the car was fired up, but since I am running out of things I can work on till other parts arrive, I installed the original Fiat Emblem in the hood. It's supposed to be chrome, but so was the suspensions, plus, the car and I are both heading for our golden years.....
Posted by Chris Gilman at 10:02 PM 2 comments: