My original plan was to use plastic pallets to make up the floor, this would keep weight down and minimize complexity. After a few design iterations I realized it would be much better to just build a proper floor. I created cross beams for the floor structure from 2”x4”- 16ga. (.062”) steel tube and welded 2x4 joist hangers on 24” centers. On each end I welded a 4” tall piece of the 4’x4” steel tube with a 6”x6” base plate to create sockets to receive the 4x4 timbers that hold up the ceiling. These 4x4 sockets were also drilled to accept a 3/8” bolt from the outside. Around the perimeter I used the same 2x4 steel tube and at each end I cut off 3 walls to render “tabs” that could be bolted through the same holes drilled in the outside of the 4x4 sockets. This way, these steel perimeter tubes would secure the cross beams at set intervals so the 2x4’s set into the joist hangers would not need to be fastened into the hangers. On top of this I used 5/8” plywood as a sub floor. Also bolted to the steel cross tubes.


Now that I had the floor frame built I set up the whole “first floor” Even without the wall skins, the structure was surprisingly stiff. 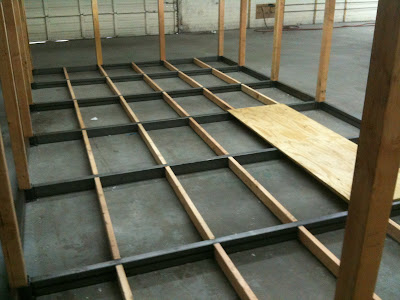 Eventually I added a ¾” pine board floor over this sub floor.

In every step, I tried to make sure anything a guest would touch or stand on felt solid and secure. I didn’t want the illusion of a “real house” spoiled by a “spongy” floor or “wiggly” post.

The walls needed to be light weight and easy to maneuver as well as stiff. I found a plastic skinned foam board from a local supplier that looked promising.

Since most sheets are a standard 4 foot by 8 foot and I didn’t want seams in the walls at every 4 ft. (This would not look like a real plastered brick exterior) I decided to bond two 4x8‘ panels together edge to edge to make 8x8’ panels. This meant that the thickness of each panel needed a tolerance to be within the skin thickness. The 1” PVC material I found from the local supplier had a skin of foamed PVC .100” thick, which was great, except that in one of my sample sheets the overall sheet thickness varied by .240”, no good. This would mean the skins wouldn’t line up with each other and the skins will not bond with the foam. The other issue was all of the sheets had huge blisters under the skins. No good!
One of the other companies that makes a similar material, but with styrene skins, is “Gilman Brothers” in Gilman CT. (I kid you not) They advertise that their plastic skinned board is available with .015” and .030” skins in overall thicknesses from ¼” to 2”. I called them and the salesmen was very interested in the project and sent off sample next day air. These looked great and his note said he would talk with the president of the company and thought they could supply what I needed especially since I needed 50+ sheets. But then nothing, no returned calls, no emails. Eventually I reached the salesman again and he informed me the material is only stocked in .015” skins and only ½” and ¼”. It would be 8 to 10 weeks for any other thickness and a minimum order. Well I was a bit peeved, I had just wasted 2 weeks with these guys only to find out they wouldn’t/ couldn’t help.

Now I was in trouble and time was against me The material from China was garbage, the other companies overseas had too long a lead time, the one U.S. company I pinned my hopes on didn’t come through and I was having trouble finding another domestic supplier/ manufacturer who had what I needed at a price I could afford.

I eventually found “Laird Plastics”, http://www.lairdplastics.com/ who were very helpful and worked me a great deal on foam board with .030” styrene skins. Since I planned on putting a lightweight metal rim (either a “U” or “J” channel) around each 8x8 panel and was having trouble finding something in 1”, I went to ¾” as there were a number of drywall edgings that would work.

I received the order in a little less than 2 weeks, which was great as Pennsic was about a month away. I bonded the 2 sheets edge to edge by using masking tape to “Pull” the sheets together and applying Weld-On to the two seams. Weld-On is a trade name for solvent cement. Solvent cements/ glues, chemically “melt” the base material and when the solvent evaporates, the joint is nearly as strong as the base material. It comes in different “thicknesses” from water thin to a honey like consistency. It is most commonly used for joining PVC plumbing pipe. Although there are some “universal” solvent cements, the ones for specific plastics (ABS, PVC, Styrene, Kydex ect.) are often stronger.

Once the sheets where cut to size, I glued the galvanized “J” trim around the perimeter of each wall section using a white “Locktite” brand caulk/ adhesive.

The wall panels are attached with “Sidewalk” bolts. These are ¼-20 stainless bolts with a very large diameter / thin head. This way I could drill a 3/8” hole and give myself more “wiggle” room to line things up.

However even with this “wiggle” room, I knew the chance of lining up multiple holes in multiple 8 foot square panels on a bolt together timber frame house was unlikely. The house is 12’ wide and 23” long, so there are between 1 and 3 panels on a wall. So on each side of the house only the panels at each end of a wall where drilled through the metal “J” edging and bolted to their respective corner 4x4’s. Now this only attached the two end panels on one edge each. For the other edges I left a gap between each panel of ½” and made a separate fascia board with a thin wedge shaped strip or rib running down the center back. The sidewalk bolts went through the fascia and through this “V” shaped “rib” and threaded into the 4x4 between the wall panels. 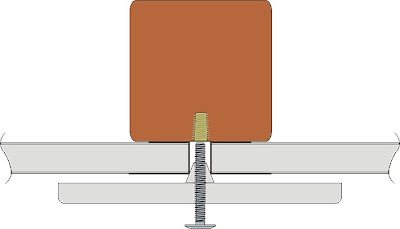 This way, as the bolts were tightened, they forced this wedge between the ½” gap between the panels and automatically paralleled the panels and wedged them tight, without the need of lining up holes in each panel. This worked quite well in the field and made wall assembly quite fast. As I stated earlier I was not going to use any “wood screws” and so each sidewalk bolt screwed into a threaded metal insert screwed into the wood.

Once all the wall panels were attached the house was extremely rigid.
Posted by Chris Gilman at 9:54 AM