Polish Eagle Racing & The Fiat 128 SKI - Cleaning & where to start.

The garage was set up, most of the parts had been recovered from storage and the car was at the media blaster getting it's tough as nails Imron paint removed. One of the issues with media blasting (like sand blasting but with "softer sand") is if you are too heavy handed and blast an area too hard, you can warp the body panels and this Imron paint was designed to resist such abrasion. Think about it, you have hundreds of thousands of little "rocks" you are slamming into the surface at high speed. They act like miniature hammers and can potentially stretch the surface of the steel, warping the sheet metal. But this guy came recommended by a friend who builds high end hot rods, and it is a race car, not a show car. But still, one thing my dad took pride in, was his projects where always neat, clean and well finished. I considered chemical dipping, but the media blasting seemed a better choice.

While I waited for the chassis, I cleaned parts and took inventory. Cleaning the grime off of race car parts is generally easier than street car parts because they don't have as much "road grim" on them, but these had been stored for 15 years and what oil was on them had had plenty of time to pick up dust and other crap. I bought a parts cleaning tank and some water based de-greaser. The stuff worked pretty well and the parts cleaned quickly. Since most of the components have been in storage, they where in fine shape, just dirty. A few things I knew would need more attention, like the clutch.
In order to mount the engine on the stand, I took off the tansaxel/ transmission, pressure plate and, well something that used to be a "clutch". 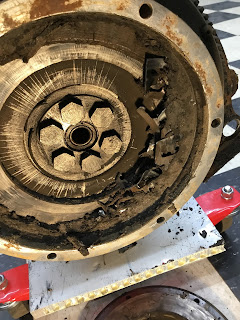 The debris in the corner of this picture, was, at one time, a Formula Ford clutch. I don't think I can fix that. I'll source a new one.
As I said, Frank Bernstein did a lot of engine work on the car.
I had tried to find Frank a few times over the years on the internet, but with no luck. I thought I should look again, since I think Frank may be the one who suggested the Formula Ford clutch.
Timing...
The other day, I was talking to my brother Randy, who, among other things, worked as a model builder for the author Walter Wick in Hartford Connecticut. (https://en.wikipedia.org/wiki/Walter_Wick)
He tells me, that Walter asked him to attend a small show in Hartford on Walter's work and after the show, Randy had a number of people asking him questions about his models and working with Walter. He told me an elderly lady was standing patiently behind him, waiting her turn to ask Randy a question. When he turned to talk with her, she introduced herself as Mrs Frank Bernstein! I thought how amazing it That! Turns out he didn't get her phone number. But, he looked in an old thing called a phone book and found the number to Franks son, and I was able to reach Frank.

As I said previously, my dad was reading the rule book from front to back to see what was allowed and what fell in between. On most cars, the stock suspensions mounting points are most often mounted in a stiff rubber bushing. This helps absorb road vibration to make the ride smoother, but at a cost. As the suspension flexes in these bushings, the geometry changes and this negatively effects the handling performance. For a race car, this is not ideal, so many companies offer aftermarket replacements that help improve handling. But with the Fiat, these could not be sourced, so Dad did everything custom. First, he modified the mounting points to work with rod ends, a solid bearing swivel. Then he reinforced sections of suspension, as a "Safety precaution" Because the GCR said you couldn't change the stock suspension, but if you where making safety modifications, that was OK. In addition to extra bracing, all of the spot welded places on the production made suspension components got the full TIG treatment on their seams. Then, all of the suspension was satin chromed. Over the years this has started to flake off, so it will need to be redone. In addition I knew I had to try and correct a mistake from 40 years ago. 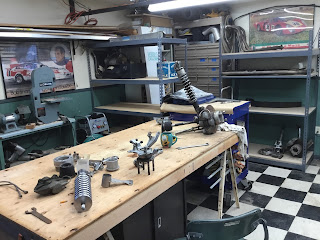 The Fiat came stock with a "new" suspension design, called a MacPherson strut. While these sealed shock in a strut design had be around since the 50's, they where just finding there way into mainstream car production. Interestingly, a Fiat designer in the 1920's filed a patent for a similar design, likely inspiring MacPherson on his design.
The issue I had, was dad had taken the sealed strut, and cut the top off to get the dampener (Shock absorber) out. He then added a threaded collar and a nut at the top so you could secure an after market performance dampener insert, like Koni. In addition, he added an outer threaded collar that the coil spring rested on, so you could adjust the ride height of the car. 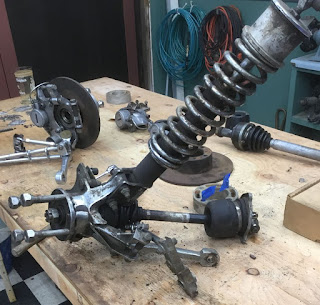 The problem I wanted to correct was, the inserts. These struts where so new, that virtually no one made performance competition inserts. Koni made one for a Volkswagen Rabbit, but it was too long. With all of the suspension mounts moved 3" up into the chassis, the struts needed to be shorter than stock. The top mounting points for the rear dampers could be moved up, since the trunk offered plenty of extra height, but the front was another issue, the hood was in the way. So shorter struts where needed. Dad had contacted Koni and they agreed to make custom inserts for the Fiat. Problem is, when we got them, Koni had copied the stock length, not making them shorter, so dad had to cut open the top of the reinforce shock towers and mount the struts above the tower, rubbing the Fiats hood.
I figured now, with the internet, I could source the correct length inserts. Well in all these years, there have been many improvements to this design and unfortunately, one of these, was to increase the dampers diameter from 39mm to 43.5mm. So forget length, just finding 39mm inserts was difficult. The company Midwest Bayless offers a strut of almost the exact design to the one my father built, but using the larger dampers. But my goal here is to rebuild the car as he designed it and not use modern parts if I can avoid it. I posted some images online on the SCCA GT Lites Facebook page and I was pointed to Angelo at Anze Suspension in upstate New York. After a phone conversation, he thought he could find a solution. We also had to figure out why Dad had added a 3" aluminum spacer above the spring. I vaguely remember that the springs where too soft, so this spacer I think was to raise the cars ride height.
To be continued....