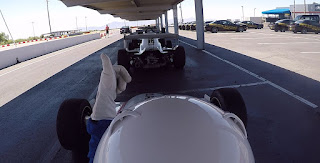 Over the 4 days; I didn't wreck any of the cars. Got the tail out a little in both the Viper and the Formula Mazda and the "skid cars" are more fun then any mere mortal deserves!
I was a bit worried about fitting in the cars. The first day, we didn't need helmets in the Vipers and although they were going to reserve the "lowered seat" Viper for me, there was another fellow who was using it. I had the regular seat version and it's a good thing I didn't need my helmet, because I would have had to drive with my head tilted. The next day, I did get the lowered seat car, and with my helmet, I just fit. The problem was, the seat didn't move and my instructor could not drive the car. So Mike McGovern, the chief instructor drove and coached me (as I sat in the passenger seat, with my head tilted)
On day four, we where introduced to the Formula Mazda. This was a big worry for me, could I fit in this small formula car. It was a little snug, but I did managed to shoe horn myself in by tucking my shoulders behind the side roll bar supports. I wish my Mom's significant other, Damon Barnett was still with us, as he was Mazda's first competition director. He would have gotten a kick out of me driving the Mazda race car. (Damon died in 2011)
In the formula Mazda, I did a 108.3 lap. Now a 1 minute flat is a winning lap, and 8 seconds is a huge difference, but it was my first day in the car and I have at least 100 lbs on the driver who turned that lap. (At a race on the same track, not in our class) So, although I could see where I needed to go faster and how I have to improve my sight, I feel I did OK.  I highly recommend the course for anyone interested in better driving skills. 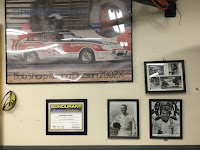 I put my "diploma" on the wall of the shop, next to some old drivers I knew.

When I got back from Phoenix, the Fiat 128ski had been color sanded and could ride home in it's new enclosed trailer. (eBay find in Phoenix). My wife (a graphic designer for Walt Disney Imagineering) is restoring the "Polish Eagle Racing" logo my oldest brother designed and silk screened for the car back in the day. In addition to using it on the car, the plan is to apply it to the new trailer. 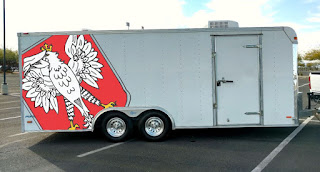 Once home, I couldn't wait to start putting pieces back on the car. So Saturday and Sunday was about 12 hours each, of boltin it back together! Lots still to do, but it is so nice to see it clean and new looking. It's been nearly 40 years since I saw it like this. I modified the peddles to better suit my size 12 feet and went to put in the safety belts, when I realized they where not correct. I called Summit Racing and they where more than helpful in finding what I needed, processing the new order and making the return super easy. 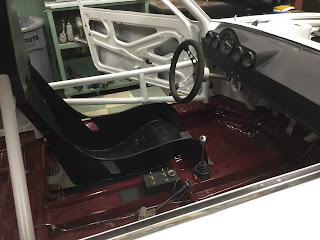 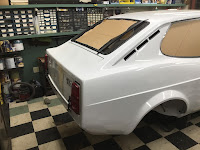 Put in the brake lines, fuel lines and the fire suppression system. Also started reassembling the Girling calipers. Installed the new Plexi side and rear windows as well as the retaining straps. The windshield should be arriving soon, the gearbox replacement gear and lower final drive will be here in a couple of months, so I'm sourcing a stock 128 box as a stand-in for testing. I was told the suspension was ready, but they bright chromed it, instead of matte chrome, so maybe later this week that will be remedied. So far, I have only had to replace a small number of parts, so the car is going to be very original. I even managed to save the original rubber trunk hold downs. 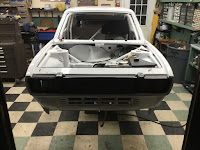 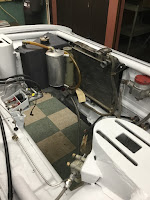 Now I have to figure out which oil line goes where. My brother took the car apart and put tags on the parts, but it's been so many years, most of the writing has disappeared. The dry sump has 5 ports and I'm not clear on what does what. Time to find out, since poor oil pressure is NOT what you want in a race car, specially when it revs to 10,000 RPM!
Posted by Chris Gilman at 10:19 PM