Things I've made: Tale of the two Vendel helmets

This is a project I did a number of years ago, but was recently asked about it, so I thought I'd post something about the helmets I made.
Years ago I made a pre-Viking age, or "Vendel" decorated helmet for a TV producer as a private commission.  At the time, I was pretty happy with it. It was only the second time I did "repousse', the tooling of metal. The first time was for the "Viking" box used to hold the Loki Mask in the movie "The Mask" 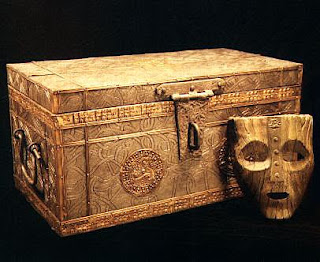 However, as time goes on, hopefully, one learns more, and sees things in a new light. As I became more educated in the Vendel period, the light came on, and I realized this helmet was not very good.
Now, of course, I was compelled to make one that was better. But my life is a busy one, and was many years before I would make the time to do this.

Finally,
just as I started gathering materials on the Vendel period together and planning what I would make, a friend who was managing my rental department, expressed his desire of owning one of these decorated helmets or "field crowns". Skip, who, was heavily into Viking history,  had been doing a great job running the department and I always felt I couldn't afford to pay him enough. I felt this would be a nice thank you. Plus, if he knew I was making one of these, he would be jealous, so I thought, I'll just make two!
This is how my life often goes; No time to build one of something, but two of them, I'll figure out how to do it. (Although, I'm still trying to figure out how to get those two Ferrari's!)
The trick was, how to keep Skip from discovering what I was planning.

The Vendel period is a modern scholarly classified age in Sweden from 550 to 790 AD. Many of the extant swords and helmets are highly decorated and had similarities to late Roman ridge helms.

There are around 26 helmets or helmet fragments that have been found across Scandinavia, Northern Europe and eastern Russia. I don't know how many swords have been found. 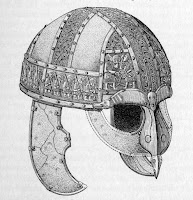 Finds from graves at Vendel and Valsgärde show that Uppland, or the east-central part of Sweden, was an important area during this time and many of these finds are very well documented.
Although detailed documentation was difficult to come by, back in 2004 when I started, but I did manage to find a couple of Swedish publications that had some excellent photos.
Eventually I decided to make a helmet for myself similar to the Valsgärde 5, but I had to find out what Skip fancied.  Skip is a stickler for authenticity and I had planned on letting him see what I was making for myself, but I needed to keep him in the dark about the second one for him, while still get feed back on what he was dreaming of. After some surreptitious questioning, I found out he always liked the Vendel 14 helmet.
Interestingly, when I showed him an image of the Vendel 14, as it is now in a museum, he said, no, not that one. As we flipped through the book, he spotted a drawing of the one to which he was referring. The helmet he had admired for all those years was an early archaeological drawing of what they thought the Vendel 14 helmet would look like, once it was removed from the dirt and rust in which it was entombed. Once it was cleaned and reconstructed however, it looked very little like this drawing. (This incorrect drawing is still being published as a depiction of the "Vendel 14" helmet.)
Skip was pretty bummed because he realized he was in love with a helmet that was not a real thing. But I pointed out, the drawing is in keeping with the style of other helmets that had been found and it was still a viable choice. I really hoped he agreed with my assessment, because I really didn't like the real Vendel 14 helm. (Although, now it's grown on me a bit) He did and so I continued my research and planning.


I would make the helmets from modern sheet steel, and since we were likely to use these in reenactment battles in Europe, I chose to make them in 1050 spring steel, so the steel could be hardened. This process was all pretty straight forward, although the lattice work on the Valsgärde 5 turned out to be a little tricky. I needed to make sure all of the small bands lined up nicely with each separate panel. (Now, new research I have found, suggests that these areas were covered with fabric, and not visible!)
The decoration was more unfamiliar to me, so that was the biggest hurdle on this project.

First, I had to find out how these were made in the period and then see if I had a way to make them with the skills and tools I had available to me. The main decorated panels were made of thin "foil" sheets of metal, pressed over bronze relief plates. The center crest seemed to be fabricated or cast and the eyebrows and crest terminals were cast. All of the helmets I have researched have some type of copper alloy for these decorations, but Skip wore tons of really nice silver Viking jewelry. So I planned to make his decorations with fine silver.
To save time, I came up with a technique of making the pressed decorative panels by using a etched magnesium plate. These were used for creating rubber stamps and in the printing profession. The advantage to the acid etched magnesium, is the magnesium cuts extremely fast with the correct acid, so fine details can be made right next to deep, large details. If you are interested in this process, here is a nice video on how these mag plates are made.
Once I drew the artwork, I scanned it into the computer and did some corrections and scaling. I then printed out full size artwork to check porportion and spaceing of the design elements.
I would need to test metal thickness for the finished foil plates and how the size and depth of the etching worked with this foil.
There were a lot of tests. But, eventually, I decided to use .005" fine silver and brass pressed into the mag plates. People have asked, why not Sterling Silver; Sterling is a harder alloy that contains  92.5% by weight of silver and 7.5% of other metals, usually copper, so it is harder. Fine silver is 99.9% silver, so it can be made softer. This turns out to be critical with my process. To impress the foil, I used wet leather and my 20 ton mold press. The wet tooling leather (flesh side down) was chosen over rubber, because the rubber acts as a "single surface" and would bridge certain fine detail. The wet leather on the other hand was more granular and pressed into these details nicely. Once the foils were pressed, I used small metal ball and spoon shaped tools to press or "sculp" more dimension into the foils by working the backside of each foil panel, while it was supported in pitch. Another element is the ribbed strips that boarder the panels. This was made by turning a rolling die on my lathe and rolling each strip through the mill. This of course required a few steps, annealing, straightening and re-annealing. 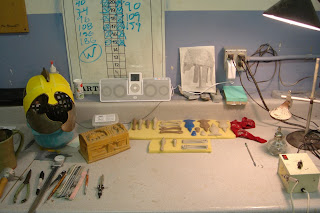 For the cast details I carved waxes instead of carving the mold from soft stone, like the originals had been made. Part of my job making props is to figure out techniques that can achieve a specific look, but can produce the item faster or in a way more familiar to my skill set. 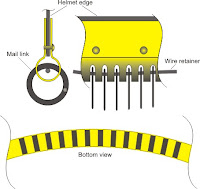 Since Skips persona in the living history was more Viking then Vendel, I formed the fine silver eyebrow pieces from thick sheet and did punch decoration, which was more the style of Viking work in later centuries. These pieces were placed in pitch for support and I made a variety of steel punches with the needed shapes.

The other trick piece to make was the support for the mail drape across the back of each helm. This needed to be a hollow tube, curved in a semicircle, with a set of flanges sticking up, in order to fit the "tubes" to the lower rim of each helmet. In addition, each tubular section needed to have slices cut in at intervals in which to fit each ring on the top edge of the mail. The links of the mail are then held in place with a wire threaded through the links inside this tube. Nearly all the edges have a rolled boarder of brass or silver. This was fabricated by starting with strips, then pulling them through a draw die so they curl up like a tube, Once annealed, the can be formed around the edge of the plate.

The last task, was making rivets for the silver helmet, since I never found a source for silver rivets. 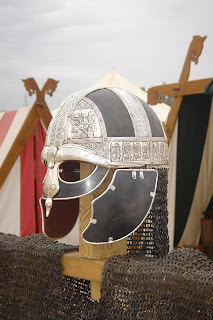 In the end, I finally did get both helmets completed. Here they are. 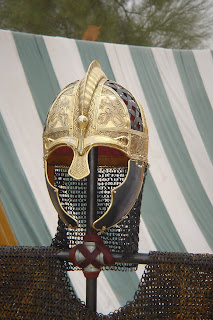 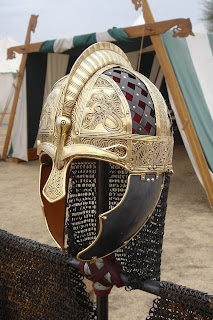 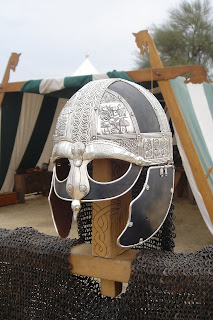 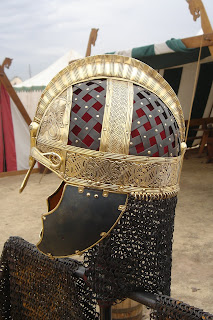 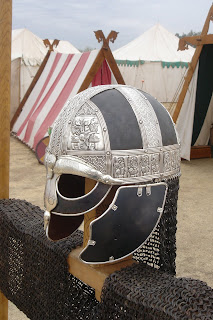 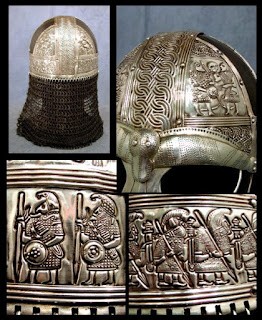 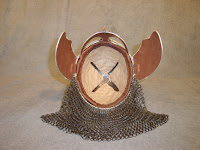 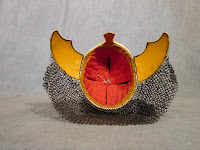 I told someone that these came as a kit: All flat material, no instructions and one of them was missing the rivets!....their response......"Where did you buy the kits?"

Thanks for looking.
Posted by Chris Gilman at 8:32 PM